Kolvenbach was of the opinion that Jorge Bergoglio, Francis, is a sociopath...


"Last Saturday, Father Peter Hans Kolvenbach died in Beirut, Lebanon. He was the Superior General of the Jesuits from 1983 to 2008. Kolvenbach allegedly wrote to the Vatican recommending that Jorge Mario Bergoglio not be made archbishop of Buenos Aires because he was emotionally unstable and temperamentally unreliable. John Paul II promoted him anyway, believing that liberal Jesuits were unduly prejudiced against Bergoglio because he had been unsympathetic to Liberation Theology.

Bad Relationship: As the Argentinean provincial of the Jesuits, Bergoglio did not form as warm a relationship with the superior general, Peter Hans Kolvenbach, as he had with his predecessor, Pedro Arrupe. Kolvenbach even intervened to unseat Bergoglio and spurned him on his trip to Argentina in 1988. Bergoglio was exiled to Cordoba and his followers sent abroad."

I addressed the Kolvenbach report here. Kolvenbach was of the opinion that Bergoglio is a sociopath.  See here.

One of the most revealing traits of the sociopath is that he or she doesn't care at all what others think.  Ever.  See here.

Profile of the sociopath here

Shallow Emotions
When they show what seems to be warmth, joy, love and compassion it is more feigned than experienced and serves an ulterior motive. Outraged by insignificant matters, yet remaining unmoved and cold by what would upset a normal person. Since they re not genuine, neither are their promises. 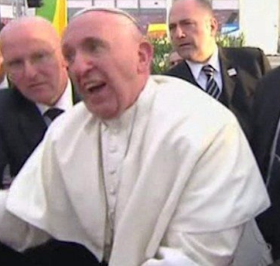