“We already knew that Francis Bergoglio generally doesn’t much like the religious part of religion” – writes the journalist Hilary White on her blog. She adds: “More and more people are waking up to the self-evident fact that Bergoglio simply isn’t a Catholic, and that he wants to place himself as the head of an entirely new religion-free religion.”


Father Linus Clovis makes the point that,“Obedience is owed to the pope, but the pope owes obedience to the word and the apostolic tradition. We have to obey the pope, but the pope himself must obey the written word. He must obey the tradition. He must respond to the inspiration of the Holy Spirit. Obedience is owed to the pope, but it is the duty of the pope to give the character of possibility to this obedience. The pope has to facilitate our obeying him, by himself being obedient to the Word of God. Pope Felix III told us, ‘an error that is not resisted is approved. A truth that is not defended is suppressed.’ So we have an obligation to resist error, and we must do everything that we can to promote the truth.”  Father Clovis made this remark in response to the crisis in the Church and the role of Pope Francis in this crisis.  See here.

"The apostasy of the city of Rome from the vicar of Christ and its destruction by Antichrist may be thoughts very new to many Catholics, that I think it well to recite the text of theologians of greatest repute. First Malvenda, who writes expressly on the subject, states as the opinion of Ribera, Gaspar Melus, Biegas, Suarrez, Bellarmine and Bosius that Rome shall apostatize from the Faith, drive away the Vicar of Christ and return to its ancient paganism. ...Then the Church shall be scattered, driven into the wilderness, and shall be for a time, as it was in the beginning, invisible; hidden in catacombs, in dens, in mountains, in lurking places; for a time it shall be swept, as it were from the face of the earth. Such is the universal testimony of the Fathers of the early Church.”- Henry Edward Cardinal Manning, The Present Crisis of the Holy See, 1861, London: Burns and Lambert, pp. 88-90)

Cardinal Manning delivered a series of lectures in 1861 under the title “The Present Crises of the Holy See Tested by Prophecy” in which Manning he foresaw a future crises in the Roman Catholic Church initiated by a false ecumenism and progressivist theology that many orthodox Catholics have loathed following the Second Vatican Council. Manning believed that this progressivist current would undermine the authority of the Church and ultimately result in a departure from the true faith by the nations together with the displacement of the true pope by a false prophet, thus ushering in the Antichrist and global apostasy. Manning also believed secret societies like the Freemasons were part of this conspiracy. “The secret societies have long ago undermined and honeycombed the Christian society of Europe, and are at this moment struggling onward towards Rome, the center of all Christian order in the world,”he wrote. But when he looked at the prophecy in Revelation 18 concerning the end-time destruction of Mystery Babylon, Manning saw it was the hand of God in judgment of worldwide apostasy emanating from Rome:
"We read in the Book Apocalypse, of the city of Rome, that she said in the pride of her heart, “I sit as a queen, and am no widow, and sorrow I shall not see. Therefore shall her plagues come in one day: death, and mourning, and famine; and she shall be burned with fire, because God is strong who shall judge her.” Some of the greatest writers of the Church tell us that…the great City of Seven Hills…the city of Rome will probably become apostate…and that Rome will again be punished, for he will depart from it; and the judgment of God will fall…"

Manning explained how many of Catholicism’s greatest theologians agreed with this point of view:

"The apostasy of the city of Rome…and its destruction by Antichrist may be thoughts so new to many Catholics, that I think it well to recite the text of theologians, of greatest repute. First, Malvenda, who writes expressly on the subject, states as the opinion of Ribera, Gaspar Melus, Viegas, Suarez, Bellarmine, and Bosius, that Rome shall apostatize from the faith, drive away the Vicar of Christ, and return to its ancient paganism. Malvenda’s words are:
'But Rome itself in the last times of the world will return to its ancient idolatry, power, and imperial greatness. It will cast out its Pontiff, altogether apostatize from the Christian faith, terribly persecute the Church, shed the blood of martyrs more cruelly than ever, and will recover its former state of abundant wealth, or even greater than it had under its first rulers.'
Lessius says: 'In the time of Antichrist, Rome shall be destroyed, as we see openly from the thirteenth chapter of the Apocalypse;' and again: 'The woman whom thou sawest is the great city, which hath kingdom over the kings of the earth, in which is signified Rome in its impiety, such as it was in the time of St. John, and shall be again at the end of the world.'
And Bellarmine: 'In the time of Antichrist, Rome shall be desolated and burnt, as we learn from the sixteenth verse of the seventeenth chapter of the Apocalypse.' On which words the Jesuit Erbermann comments as follows: 'We all confess with Bellarmine that the Roman people, a little before the end of the world, will return to paganism, and drive out the Roman Pontiff.'

Viegas, on the eighteenth chapter of the Apocalypse says: 'Rome, in the last age of the world, after it has apostatized from the faith, will attain great power and splendor of wealth, and its sway will be widely spread throughout the world, and flourish greatly. Living in luxury and the abundance of all things, it will worship idols, and be steeped in all kinds of superstition, and will pay honor to false gods. And because of the vast effusion of the blood of martyrs which was shed under the emperors, God will most severely and justly avenge them, and it shall be utterly destroyed, and burned by a most terrible and afflicting conflagration.'"


It was Saint John Bosco who prophesied, "And to you, Rome, what will happen! Ungrateful Rome, effeminate Rome, proud Rome! You have reached such a height that you search no further. You admire nothing else in your Sovereign except luxury, forgetting that you and your glory stands upon Golgotha. Now he is old, defenseless, and despoiled; and yet at his word, the word of one who was in bondage, the whole world trembles.

Rome! To you I will come four times.

The first time, I shall strike your lands and the inhabitants thereof.

The second time, I shall bring the massacre and the slaughter even to your very walls. And will you not yet open your eyes?

I shall come a third time and I shall beat down to the ground your defenses and the defenders, and at the command of the Father, the reign of terror, of dreadful fear, and of desolation shall enter into your city.

But My wise men have now fled and My law is even now trampled underfoot. Therefore I will make a fourth visit. Woe to you if My law shall still be considered as empty words. There will be deceit and falsehood among both the learned and the ignorant. Your blood and that of your children will wash away your stains upon God's law. War, pestilence and famine are the rods to scourge men's pride and wickedness. O wealthy men, where is your glory now, your estates, your palaces? They are the rubble on the highways and byways.

And your priests, why have you not run to 'cry between the vestibule and the Altar,' begging God to end these scourges? Why have you not, with the shield of faith, gone upon the housetops, into the homes, along the highways and byways, into every accessible corner to carry the seed of My word? Know you that this is the terrible two-edged sword that cuts down My enemies and breaks the Anger of God and of men?"
In our own time, the germ ideas of a one-world religion are already being sowed. And this false humanitarian religion will burst into poisonous flower when enough hearts have grown cold and have abandoned the true religion. As Jane Le Royer explained in prophecy: "When the time of the Antichrist is near, a false religion will appear which will be opposed to the unity of God and His Church. This will cause the greatest schism the world has ever known."

Can you not see the emerging signs? How do we find the Church today? The Mystical Body of the Crucified One - the Holy Catholic Church - is climbing Calvary, carrying a heavy cross. She is experiencing the hour of abandonment and betrayal. Her body is being tormented by the scourges of sin which strike at it and by numerous sacrileges which open up deep wounds in it. A Catholic priest in East Longmeadow, Massachusetts openly calls her "evil" just as the Pharisees suggested Our Lord was evil and demon possessed (Matthew 11:18; 12: 24). And his parishioners applaud.

But too many are proud. Their eyes blinded by sin and egoism. Like the Pharisees before them, they are incapable of reading the signs of the times because their spiritual eyes are closed. They cannot hear the Spirit because their ears are closed. They cannot feel the promptings of the Eucharistic Heart of Jesus because their hearts are closed. Such people cannot endure sound teaching but have itching ears and will continue to accumulate teachers who suit their own likings, teachers who will cater to their lusts by providing them with myths (2 Timothy 4: 3, 4).

And still so many of our shepherds remain silent like mute dogs. They have not begged God to end these scourges. They have not wept between the vestibule and the altar. They have not taken up the shield of faith to protect their flocks. Their judgment will be all the more severe, for God expects more from His ministers (Luke 12: 48). 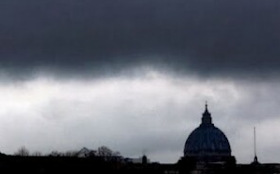