"...And his tail was dragging along the third part of the stars of heaven and he dashed them to the earth.." 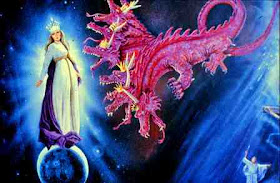 "'And a great sign appeared in heaven,' wrote St. John in the twelfth chapter of his Apocalypse. 'A woman clothed in the sun, and the moon under her feet, having on her head a crown of twelve stars...and I heard a voice in heaven saying: Now is come salvation and strength and the kingdom of God and the power of His Christ.....And another sign was seen in the heaven, and behold, a great red dragon having seven heads and ten horns, and upon his head seven diadems. And his tail was dragging along the third part of the stars of heaven and he dashed them to the earth.'
Most Scripture scholars agree that the sign of the Woman in heaven has a double symbolism, referring to Mary and to the Church. The sign of the red dragon and the beast, who comes up from the abyss to wage war against the camp of the saints, refers to Satan and the Antichrist. Earlier in chapter nine, St. John depicts the confusion and division, through heresy and schism, that these two agents of evil will bring upon the Church and the whole world in the last days.
Once again it is profitable to apply St. John's vision of falling stars, but this time with special application to the relationship between Mary and her priests. In her many apparitions Mary constantly requests prayers, reparation and compensation for the sins of priests. As the most valiant of all women, indeed, of all saints, she wants to bestow on all who have been ordained into the holy priesthood of her Son a high degree of her own heroic faith, fidelity and zeal. For she knows how necessary these virtues are for priests if they are to dedicate their lives wholeheartedly to attaining the glory of God and the salvation of souls. Mary knows, too, that priests are the special target of Satan's malice who would destroy her Son's Church through the corruption of His priests. St. John, using striking dramatic metaphors, reveals the destructive tactics of Satan and the Antichrist.
'And I saw a star which had fallen from heaven to the earth, and there was given to him the key of the bottomless pit, and there went up from the pit a smoke like that of a furnace; and the sun was darkened and the air, by reason of the smoke of the pit. And out of the smoke locusts went forth upon the earth and they were told...to harm only such men as have not the seal of God upon their forehead.'
Now in prophetic symbolism falling stars almost always refer to tepid, weak or apostate bishops and priests who are harbingers of grief and disaster to the whole world. The key to the shaft of the abyss is an emblem of their apostasy. Such traitorous religious leaders and teachers ally themselves with the rebellious angels. Instead of using the keys of the kingdom of God, which they have received from the Church through their priesthood and the mission of teaching the Gospel so as to suppress and defeat the satanic forces incarnate in wicked men while advancing the holiness of the faithful, they rather abuse their powers to foster and propagate error and evil. They opt to open the abyss and let loose upon the earth the plagues of darkness and wickedness.
Today too many fallen stars - rebellious bishops, priests, theologians, philosophers, nuns and Catholic intellectuals - are abusing their sacerdotal powers and intellectual gifts to seduce, enslave and precipitate into hell vast numbers of wayward sheep. Out of the darkness of the pit they have loosed the forces of error, evil and scandal. The smoke streaming from the pit darkens the sun of Christ's truth and obliterates the splendour of His holiness; it infects the air with decadent, immoral odors. Everything is cast into confusion; gloom infests the world of religion and reason; grace, the life-giving oxygen of the soul and body, is strangled out of the supernatural organisms of the children of God. Moreover, the darkening sun and sky betoken the eclipse of the Teaching Authority of the Church, the lowering of men's respect and love for her, their loss of reverence for her Master and the demeaning of both Christ and His Church to the level of being mere natural, defective organs of society lusting after domination over men's souls and bodies through the accumulation of material riches and political power.." (Fr. Vincent P. Miceli, S.J., The Antichrist: Has he lauched his final campaign against the Savior?", pp. 260-261).
More than ever today, we need to pray for Christ's priests. This is not a time to engage in anti-clericalism. Faithful priests need our support. They need our prayers. We are now facing the final confrontation between two camps: the one belonging to Our Lord Jesus and His Mother and the other to Satan and the Antichrist.
Pray and offer reparation. Offer your Holy Mass and your Holy Rosary every day not only for your own spiritual needs but for priests.
Related reading here.
Paul Anthony Melanson at 4:34 AM
Share