Solicitor General Elena Kagan has called for Socialists to unite in order to defeat the "entrenched foe." 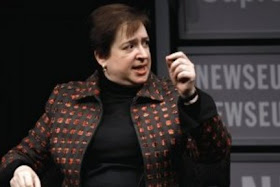 White House aides expect President Obama to select Solicitor General Elena Kagan for the Supreme Court. See here. Ms. Kagan, while attending Princeton University as an undergraduate, entitled her senior thesis "To the Final Conflict: Socialism in New York City, 1900-1933." In her thesis, Ms. Kagan wrote, "In our times [this was 30 years ago], a coherent socialist movement is nowhere to be found in the United States. Americans are more likely to speak of a golden past than of a golden future, of Capitalism's glories than of socialism's greatness. Conformity overrides dissent; the desire to conserve has overwhelmed the urge to alter. Such a state of affairs cries out for explanation. Why, in a society by no means perfect, has a radical party never attained the status of a major political force? Why, in particular, did the socialist movement never become an alternative to the nation's established parties?" (p. 127).

And then Ms. Kagan issues her call to action, her call for Socialists to unite in order to defeat "the entrenched foe." She writes, "Through its own internal feuding..the SP [Socialist Party] exhausted itself forever and further reduced labor radicalism in New York to the position of marginality and insignificance from which it has never recovered. The story is a sad but also a chastening one for those who, more than half a century after socialism's decline, still wish to change America. Radicals have often succumbed to the devastating bane of sectarianism; it is easier, after all, to fight one's fellows than it is to battle an entrenched and powerful foe. Yet if the history of Local New York shows anything, it is that American radicals cannot afford to become their own worst enemies. In unity lies their only hope." (pp. 129-130).


"We are now standing in the face of the greatest historical confrontation humanity has gone through. I do not think the wide circle of the American society or the wide circles of the Christian community realize this fully. We are now facing the final confrontation between the Church and the anti-Church, of the Gospel versus the anti-Gospel. This confrontation lies within the plans of divine providence; it is a trial which the whole Church, and the Polish Church in particular, must take up. It is a trial not only of our nation and the Church, but in a sense, it is a test of 2,000 years of culture and Christian civilization with all its consequences for human dignity, individual rights, human rights and the rights of nations."


In short, two camps are aligning for a final conflict, a final confrontation: the Mystical Body of Christ and the Mystical Body of Antichrist. The Democratic Party has been radicalized and is now advancing Socialism. It is merely a tool of a Satanic worldwide movement to neutralize the Catholic Church and to prepare the way for the Man of Sin.
Paul Anthony Melanson at 7:19 AM
Share