Archdiocese of Boston: Boston Catholic Insider Blog blocked because it is "a distraction." 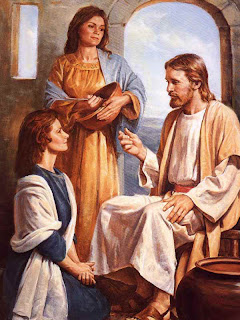 The Catechism of the Catholic Church tells us that, "..a distraction reveals to us what we are attached to." (2729). Not all distractions are bad. Some are even holy. As Raissa Maritain, writing about Saint Thomas Aquinas, notes:


"When he wept and prayed in this way, or when he was trying to find the answer to a difficult question, very often he did not hear nor feel what was going on about him. So one day, when he was at the table of the King Saint Louis, the two saints seated side by side, Brother Thomas, forgetful of the circumstances and the place, rapped loudly on the table and cried out: 'So much for the heresy of the Manicheans!' 'Master,' said the Prior who accompanied him, 'be careful, you are at the table of the King of France.' And saying this, he pulled at his cloak to bring him out of this state of holy distraction." (See here).

"As they continued their journey he entered a village where a woman whose name was Martha welcomed him. She had a sister named Mary [who] sat beside the Lord at his feet listening to him speak. Martha, burdened with much serving, came to him and said, 'Lord, do you not care that my sister has left me by myself to do the serving? Tell her to help me.' The Lord said to her in reply, 'Martha, Martha, you are anxious and worried about many things. There is need of only one thing. Mary has chosen the better part and it will not be taken from her.'"

A distraction reveals to us what we are attached to. By the grace of God, there are still people who are attached to truth. Like Mary who sat at the very feet of Truth, they are attracted by the beauty of truth and by its sheer power.

And it will not be taken from them.
Paul Anthony Melanson at 4:38 AM
Share