The masonic plan to subvert the Church from within according to Nubius...

I have said this hundreds of times before, masonic forces seek to subvert the Church from within and to create a "new church" created in the image and likeness of man.  The new humanitarian religion will result from a quiet revolution within the Church.  This new religion will be anti-supernatural.  And it will embrace the Socialistic New World Order and the Reign of Antichrist.  This is the false church Venerable Anne Catherine Emmerich saw in her visions.

Father Emmanuel Barbier, a well-known anti-modernist and anti-masonic author, transcribed a document dated April 3, 1844, in which a high-ranking leader of Italian masonic forces called Nubius explains to another highly-placed mason how the quiet revolution will work.  He writes, "Now then, in order to ensure a pope in the required proportions, we must first of all prepare a generation worthy of the kingdom of which we dream...

Cast aside the old men and men of a mature age; go to the youth, and if possible, even to children...It is to the youth that we must go, it is the youth that we must lead, unperceived by them, under the flag of the secret societies.  In order to advance with prudent steps on this dangerous but sure way, two things are absolutely necessary.  You must have the simplicity of doves and the prudence of the serpent...Never pronounce before them a word of impiety or impurity: Maxima debetur puero reverentia...Once your reputation has been established in colleges, high schools, universities, and seminaries, once you have gained the confidence of professors and students, make sure that especially those who enter the ranks of the clergy be pleased with your meetings...

Such reputation will give your doctrine access to the young clergy and to convents.  In a few years, this clergy will naturally have invaded all functions: they will govern, administer, judge, from the Sovereign's council, be called to choose the Pontiff who must reign; and this Pontiff, like most of his contemporaries, will be more or less imbued with Italian and humanitarian principles that we will start placing in circulation...Let the clergy move forward under your standard always believing they are advancing under the banner of the apostolic Keys.  Cast your net like Simon Bar Jonas; spread it to the bottom of sacristies, seminaries, and convents, rather than casting it to the bottom of the sea; if you do not precipitate anything, we promise you a catch even more miraculous than his... 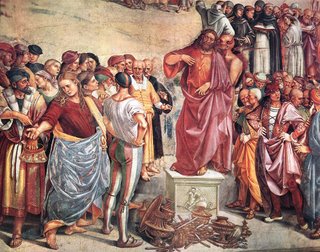 You will have fished a revolution dressed in the Pope's triple crown and cape, carrying the cross and the flag, a revolution that will need only a small stimulus to set fire to the four corners of the earth." (Nubius, Secret Instructions on the Conquest of the Church, excerpted from Les infiltrations maconiques dans l'Eglise, Paris/Brussels: Desclee de Brouwer, 1901, p. 5).