"My people perish for want of knowledge..."

Vatican II, in its' Decree on the Ministry and Life of Priests (Presbyterorum Ordinis) No. 4, tells us that: "The People of God are joined together primarily by the word of the living God. And rightfully they expect this from their priests. Since no one can be saved who does not first believe, priests, as co-workers with their bishops, have the primary duty of proclaiming the Gospel of God to all. In this way they fulfill the command of the Lord: "Going therefore into the whole world preach the Gospel to every creature" (Mk 16:15), and they establish and build up the People of God. Through the saving word the spark of faith is lit in the hearts of unbelievers, and fed in the hearts of the faithful. This is the way that the congregation of faithful is started and grows, just as the Apostle describes: "Faith comes from hearing, and hearing through the word of Christ" (Rom 10:17).


To all men, therefore, priests are debtors that the truth of the Gospel which they have may be given to others. And so, whether by entering into profitable dialogue they bring people to the worship of God, whether by openly preaching they proclaim the mystery of Christ, or whether in the light of Christ they treat contemporary problems, they are relying not on their own wisdom for it is the word of Christ they teach, and it is to conversion and holiness that they exhort all men."

According to the Council, the task of priests is "not to teach their own wisdom but God's Word." And this task is of no less importance for the priest than his offering of the Eucharistic Sacrifice. Both of these are inseperably linked to each other: "The ministerial priesthood has the task not only of representing Christ - Head of the Church - before the assembly of the faithful, but also of acting in the name of the whole Church when presenting to God the prayer of the Church, and above all when offering the Eucharistic sacrifice." (Catechism of the Catholic Church, No. 1552).

For this reason, priests have the very serious obligation to teach the faithful under their care that it is never licit to have sexual relations outside of marriage; that a Catholic cannot (having been validly married in the Church) after divorce, marry another or otherwise pretend that sexual relations with another individual are somehow "marital"; that "formal cooperation in an abortion constitutes a grave offense" and that '"the Church attaches the canonical penalty of excommunication to this crime against human life" (CCC, 2272); and that "every action which, whether in anticipation of the conjugal act, or in its accomplishment, or in the development of its natural consequences, proposes, whether as an end or as a means, to render procreation impossible, is intrinsically evil.." (CCC, No. 2370, citing Humanae Vitae, No. 14).

The Church proposes these (and other teachings) as true and it does so in the name of Christ. The priest is not to question them. He is not to ignore them or neglect them out of a false sense of "compassion" or "charity." It was Pope Paul VI who said that, "To diminish in no way the saving teaching of Christ constitutes an eminent form of charity for souls." (Humanae Vitae, No. 29).

Pope John Paul II reiterated these words in Familiaris Consortio, No. 33. We are reminded in Lumen Gentium 14 of the Second Vatican Council that: "He is not saved, however, who, though part of the body of the Church, does not persevere in charity. He remains indeed in the bosom of the Church, but, as it were, only in a "bodily" manner and not "in his heart." All the Church's children should remember that their exalted status is to be attributed not to their own merits but to the special grace of Christ. If they fail moreover to respond to that grace in thought, word and deed, not only shall they not be saved but they will be the more severely judged."

When a priest ignores or neglects his duty, his task, of serving the Word of God with fidelity, he fails to persevere in that charity described by Popes Paul VI and John Paul II as a charity which diminishes in no way the saving teaching of Christ. And he will be the more severely judged (Luke 12:48).

But so many priests have neglected their duty to proclaim the Gospel to all.  And the Church is now reaping the fruit of this infidelity.  Even though Canon Law states quite clearly that, "The Christian faithful have the right to receive assistance from the sacred pastors out of the spiritual goods of the Church, especially the word of God and the sacraments" (Canon 213), there has been a dearth of sound catechesis.  The People of God have not been formed by sound instruction based on Church doctrine and Church Tradition.  When was the last time (if ever) you heard a homily in your local parish citing the Catechism of the Catholic Church or papal documents?  Were it not for EWTN, you might never hear such authentic preaching.

And this is nothing short of shameful.  For such a foundation is vital.  Where it is absent, people will assume that they have the right to form their conscience according to their own opinions, their own whims.  The Catechism teaches us that, "Conscience must be informed and moral judgment enlightened.  A well-formed conscience is upright and truthful.  It formulates its judgments according to reason, in conformity with the true good willed by the wisdom of the Creator.  The education of conscience is indispensable for human beings who are subjected to negative influences and tempted by sin to prefer their own judgment and to reject authoritative teachings." (1783).

Those priests who remain silent while their people crave truth and direction are betraying their vocation.  And they will be (as Lumen Gentium 14 reminds us), the more severely judged.  As will every Catholic who knowingly rejects the authoritative teachings of Christ's Church.  Truly the words of Hosea apply to our own time:

"Sons of Israel, listen to the word of Yahweh, for Yahweh indicts the inhabitants of the country; there is no fidelity, no tenderness, no knowledge of God in the country, only perjury and lies, slaughter, theft, adultery and violence, murder after murder.  This is why the country is in mourning, and all who live in it pineaway, even the wild animals and the birds of heaven; the fish of the sea themselves are perishing."

And to the priests:

"But let no man denounce, no man rebuke; it is you, priest that I denounce.  Day and night you stumble along, the prophet stumbling with you, and you are the ruin of your people.  My people perish for want of knowledge.  As you have rejected knowledge so do I reject you from my priesthood; you have forgotten the teaching of your God, I in my turn will forget your children.  Many as they are, all of them have sinned against me, they have bartered their glory for shame.  They feed on the sin of my people, they are all greedy for their iniquity.  But as with the people, so let it be with the priest: I will make them for their conduct, I will pay them out for their deeds.  They will eat but never be satisfied, they will play the whore but still be sterile, because they have deserted Yahweh to give themselves up to whoring." (Hosea 4: 1-11).

In a speech given on March 21, 2009 in Detroit, Archbishop Charles Chaput, having been asked to examine what November 2008 and its aftermath can teach Catholics about American culture, the state of American Catholicism and the kind of Pauline discipleship necessary today, said that, "November showed us that 40 years of American Catholic complacency and poor formation are bearing exactly the fruit we should have expected. Or to put it more discreetly, the November elections confirmed a trend, rather than created a new moment, in American culture.”  And noting that there was no question about President Barack Obama’s views on abortion "rights," embryonic stem cell research and other "problematic issues," His Excellency said that, "Some Catholics in both political parties are deeply troubled by these issues. But too many Catholics just don’t really care. That’s the truth of it. If they cared, our political environment would be different. If 65 million Catholics really cared about their faith and cared about what it teaches, neither political party could ignore what we believe about justice for the poor, or the homeless, or immigrants, or the unborn child. If 65 million American Catholics really understood their faith, we wouldn’t need to waste each other’s time arguing about whether the legalized killing of an unborn child is somehow ‘balanced out’ or excused by three other good social policies.” 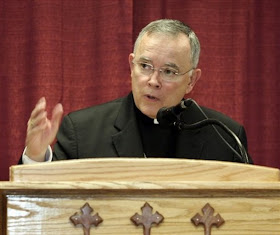 Then His Excellency offered a stunning indictment of American "Catholicism":

"We need to stop over-counting our numbers, our influence, our institutions and our resources, because they’re not real. We can’t talk about following St. Paul and converting our culture until we sober up and get honest about what we’ve allowed ourselves to become. We need to stop lying to each other, to ourselves and to God by claiming to ‘personally oppose’ some homicidal evil -- but then allowing it to be legal at the same time."  See full text here.
Paul Anthony Melanson at 7:10 AM
Share