Prophecy regarding Ireland in a vision given to Saint Patrick being fulfilled in our time?

An obscure book entitled, "The Most Ancient Lives of Saint Patrick Including the Life by Jocelin, Hitherto Unpublished in America, and His Extant Writings," recounts a remarkable prophecy which was given to Saint Patrick in a vision.

Chapter CLXXV of this work explains that, "The different States of Hibernia* are in a Heavenly Vision shown unto the Saint. And the man of God anxiously desired and earnestly prayed that he might be certified of the present and the future state of Hibernia, to the end that he might be assured of the faith, or of the value that his labors bore in the sight of God. Then the Lord heard the desire of his heart, and manifested the same unto him by an evident revelation; for while he was engaged in prayer, and the heart of his mind was opened, he beheld the whole island as it were a flaming fire ascending unto heaven; and he heard the angel of God saying unto him: "Such at this time is Hibernia in the sight of the Lord." And after a little space he beheld in all parts of the island even as mountains of fire stretching unto the skies. And again after a little space he beheld as it were candles burning, and after a while darkness intervened; and then he beheld fainter lights, and at length he beheld coals lying hidden here and there, as reduced unto ashes, yet still burning. And the angel added: "What thou seest here shown, such shall be the people of Hibernia." Then the saint, exceedingly weeping, often repeated the words of the Psalmist, saying: "Whether will God turn himself away for ever, and will he be no more entreated? Shall his mercy come to an end from generation to generation? Shall God forget to be merciful, and shut up his mercy in his displeasure?" And the angel said, "Look toward the northern side, and on the right hand of a height shalt thou behold the darkness dispersed from the face of the light which thenceforth will arise." Then the saint raised his eyes, and behold, he at first saw a small light arising in Ulydia, the which a long time contended with the darkness, and at length dispersed it, and illumined with its rays the whole island. Nor ceased the light to increase and to prevail, even until it had restored to its former fiery state all Hibernia. Then was the heart of the saint filled with joy, and his heart with exultation, giving thanks for all these things which had been shown unto him: and he understood in the greatness of this fiery ardor of the Christian faith the devotion and the zeal of religion, wherewith those islanders burned. By the fiery mountains he understood the men who would be holy in their miracles and their virtues, eminent in their preachings and their examples; by the lessening of the light, the decrease of holiness; by the darkness that covered the land, the infidelity which would prevail therein; by the intervals of delay, the distances of the succeeding times.

Is darkness intervening in Ireland as the Church there stands on the brink of collapse? 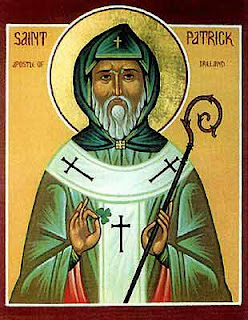