You don't have a vocation in the Worcester Diocese unless you place community above truth?


Dr. Dietrich von Hildebrand reminds us, in his essay entitled "Is Unity among the Faithful the Highest Value?," that, "There is another great danger which goes together with the distortion of love of neighbor: the danger of putting community above truth, and of implicitly making peace the highest value.  Unfortunately this tendency to regard community as more important than truth is very widespread in the holy Church today.

The first great error which we find here is the separation of community from truth.  All genuine community among men presupposes that they encounter one another in a certain realm of goods.  The solidarity which comes from worshipping the same idol and working for it, or from working together for something false or evil, does not deserve the name of community.  Such a pseudo-community is a definite evil, and possesses a disvalue.  The value which community possesses as such is here poisoned by the disvalue of that which brings people together, of that in whose name they are united.  Surely unity, community has a value of its own.  The unity of man is something of value not only because it the opposite of strife and struggle; it also has a value which is absent as long as individual men are indeed at peace, but not united in community...Community based upon error or something evil not only has no value, it has a definite disvalue.  A pseudo-community built on some evil idol is something much worse than many individual, unrelated men who are in error or do evil.  It is not only that it is worse for many to fall into error or heresy than for one to do so; it is not a question merely of a quantitative increase.  No, it is the very unity of those who encounter one another in untruth and evil which gives birth to a pure disvalue and heightens the evil.

The value of true community, the concordia,  becomes in a pseudo-community a definite disvalue.  Thus it is utterly impossible to separate community from truth, and to make community the most important thing.  Community is dependent in both its nature and value on the truth on which it is built....The value of the truth and of the true Faith is thus undeniably greater than that of community...Indeed, the value of standing in the truth, and confessing the true God, is even greater than that of the marvelous community of the mystical body of Christ.  For it is in the true Faith and in real love of God that community with Him is constituted, and this is clearly the most important thing, and that from which all other community is dependent in its nature and value...overemphasis on community, on unity among men, this tendency to put unity above the truth and orthodoxy, is a consequence of the disastrous this-worldliness which is analogous to emphasizing love of neighbor at the expense of love of God.."

It would certainly appear that the Worcester Diocese has succumbed over the years to this tragic tendency to place unity above the truth.  The company man who is willing to "go along" with sin and error "for the sake of friendship" is most welcome in this distorted notion of "community."  But the man who puts the truth first is pushed to the margins and ostracized.  For example, I stand fully with the Church's magisterial teaching.  I defend the same.  On numerous occasions I have expressed my desire to pursue a vocation to the priesthood.  But my queries have been ignored.  But Mr. Jonathan Joseph Slavinskas has been welcomed with open arms.  The difference?  Deacon Slavinskas has had praise for the late Bishop Timothy J. Harrington (who was dissent-friendly) and for Fr. Joseph Coonan, a priest who was mired in scandal and who was placed on leave in 2002 when accusations were made against him.  Specifically, Fr. Coonan was accused of physically abusing as many as fifteen men as well as his own mother and sister.

"When the Holy Father's legate, Archbishop Pio Laghi, handed you the crosier he confirmed your three-fold ministry as head shepherd of the Worcester diocese.  You became the officially authorized Prophet, Priest, and King to the people of God....These are powers of God's making that you freely accepted to serve the people of God.  To exercise these duties in all their integrity you must be one with the Chief Shepherd, the Holy Father.  You have sworn allegiance to the Holy Father in a formal way before Bishop Flanagan and the appropriate documents were sent to Rome...

We are now in the seventh year of shepherding.  How does your sworn oath of allegiance stand?  Over the years dissenters have been allowed access to the diocesan newspaper of which you are the publisher.  Dissenters have free play in the Office of Vicar of Religious, the Diocesan Commission for Women, and the Department of Religious Education.  Dissenters have spread their lies about abortion, contraception, women priests, and the legitimacy to dissent against the Supreme Authority in the Church, the Holy Father....The Holy Father has asked that all bishops give proof of their pastoral ability and leadership by withholding all support from individuals or groups who, in the name of progress, justice, or compassion, or for any other reason, promote the ordination of women to the priesthood.  Yet you fully support your own Diocesan Commission for Women that has constantly promoted the cause for women's ordination.....You were given the names of arch-dissidents who freely go about their work of undermining the Faith in your diocese.  The list included Sister Anna Marie Kane, S.S.J., who is pro-choice and pro-women's ordination, Dr. Vincent Ford, Dr. Alice affey, Dr. Bernard Cooke, Dr. David O'Brien, all professors at Holy Cross, who dissent against Church teaching.  How does your sworn allegiance stand up to this?"

Because I have been asking the same questions since the early 1990s, because I too oppose such dissent, I am not welcome.  You see, I refuse to place community above truth.  I refuse to march in lockstep with those who oppose the mind of Christ.  I refuse to condone the sexual abuse of children or homosexual behavior or to portray such evils as "harmless fun and sex games."

The Third Reich placed unity over truth.  The Communists did the same.  So too did Jim Jones' "People's Temple" which soon enough became the People's Tomb. 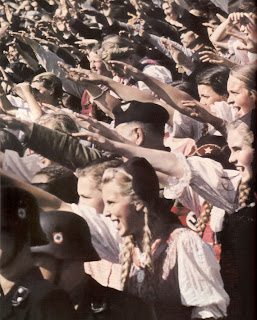