There can be little doubt about President Barack Obama's attitude toward what he deems "ordinary people."  See here

Those of us who have been concerned over attempts to portray Barack Obama as some sort of secular Messiah have been ridiculed by liberal pundits in the mainstream media, whose knowledge of Sacred Scripture is usually superficial at best, and have been dismissed as being nothing more than uneducated "fundamentalists" who dress in military khaki and who spend most of the day in a dark basement loading ammunition with one hand while holding a Bible in the other.

But the Church warns against any form of secular messianism: "The Antichrist's deception already begins to take shape in the world every time the claim is made to realize within history that messianic hope which can only be realized beyond history through the eschatalogical judgment. The Church has rejected even modified forms of this falsification of the kingdom to come under the name of millenarianism, especially the 'intrinsically perverse' political form of a secular messianism." (Catechism of the Catholic Church, 676).

Our Lord Jesus has told us that many would come as "false christs" so as to deceive. These are forerunners to the Antichrist: "Then if anyone says to you: 'Behold, here is the Christ!' or, 'Here!' do not believe. For false christs and false prophets will arise, and they will give great signs and wonders so as to deceive, if it were possible, even the elect." (Matthew 24: 23,24).

Hermann Rauschning, who eventually defected from the Nazi Party, recalled a conversation in which Hitler told Bernhard Forster, Nietzsche's brother-in-law, that he: "..would not reveal his unique mission until later. He permitted glimpses of it only to a few. When the time came, however, Hitler would bring the world a new religion...The blessed consciousness of eternal life in union with the great universal life, and in membership with of an immortal people - that was the message he would impart to the world when the time came..."

Likewise, President Obama has asserted that he is "king of the world" and that he will "change the world." Indeed, he has claimed that his election represents, "...the moment when the rise of the oceans began to slow and our planet began to heal."

The English psychiatrist William Sargent explained that, "It is not the mentally ill but ordinary normal people who are most susceptible to 'brainwashing.'" And in her book The Nazis and the Occult, Dusty Sklar notes how, "Hitler's early speeches were so mesmerizing that even people who were repelled by his ideas felt themselves being swept along. The playwright Eugene Ionesco mentions in his autobiography that he received the inspiration for Rhinoceros when he felt himself pulled into the Nazi orbit at a mass rally and had to struggle to keep from developing 'rhinoceritis.' We 'catch' ideas, too, because we want to be like others, particularly when we want not to be our despised selves. If we're satisfied, we don't need to conform, but if we're not, we imitate people whom we admire for having greater judgment, taste, or good fortune than we do....Through conformity, the person who feels inferior is in no danger of being exposed. He's indistinguishable from the others. No one can single him out and examine his unique being. Conformity, in turn, sets him up to be further canceled out as an individual, to have no life apart from his collective purpose. This gives a movement tremendous power over the individual. Even intelligent people are not immune from the desire to conform. Heinrich Hildebrandt, a schoolteacher who was anxious to hide his liberal past, joined the Nazi party, and to his own disgust, found himself 'proud to be wearing the insignia. It showed I belonged, and the pleasure of belonging, so soon after feeling excluded, isolated, is very great...I belonged to the new nobility..'" (The Nazis and the Occult, pp. 157, 158).

It was Tacitus who proclaimed, "O man, how prompt to slavery."  And waiting in the wings is a Lawless One who will rule over such men.  The Christian message will not be tolerated.  He will strive to stamp it out altogether.  He will seek to eradicate any expression of Christian thought or prayer.  He will outlaw the Holy Mass.  And then he will demand worship of himself. 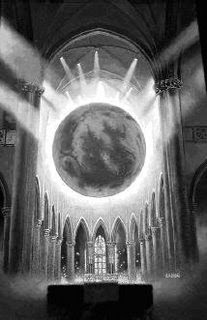 It is my belief that Barack Obama is one of many preparing the way for such a man.  For Obama, the "ordinary people" cannot govern themselves.  They must be controlled.  They must be propagandized.  They must be forced into acceptance of a New Order and its new humanitarian religion.
Paul Anthony Melanson at 7:33 AM
Share