The "pastoral" team at Our Lady Immaculate Parish in Athol: Promoting an atmosphere of hatred and violence


Last September, I noted how Deacon Scott Colley, the administrator (at least at the time if not still so) of the Facebook page for the North Quabbin Catholic Community, which includes several parishes in and around Athol, Massachusetts, banned me for taking issue with the applause which often breaks out during Holy Mass at Our Lady Immaculate Parish in Athol.  See here.  And back in 2011, I disagreed with Father Krzysztof Korcz when he blamed parents as being the sole cause of the lack of vocations and the exodus of young people from Catholic life.  See here.  Lastly, I noted how Father Krzysztof Korcz conducted a 'Cluster Survey" which included suggestions that the parish become "more tolerant" in its preaching (no need to mention any of that pesky Hell and sin business) and that it model itself after the Paulist Center - a bastion of radical homosexual agitprop which The Weekly Standard described (see here) as the place, "where people who hate the Church go to church."  See here.


We've had enough of a preaching which leaves Zebulun and Naphtali in the shadow of death.  We've had enough of a Cotton-Candy Catholicism which offers Chicken-Soup Homilies and asinine theatrics rather than the solid meat of sound preaching and liturgical reverence.  Sadly, so many of our priests haven't caught on to this.  And so they continue to spoon-feed us the unsatisfying pablum.

The time for lying is over.  I have been saying this for years.  Back in 2009, Archbishop Charles Chaput noted that, "40 years of American Catholic complacency and poor formation are bearing exactly the fruit we should have expected...We can't talk about following St. Paul and converting our culture until we sober up and get honest about what we've allowed ourselves to become.  We need to stop lying to each other..." (See here).

The lying must stop.  For this to happen, we need priests and Bishops who fear God more than they do men.  Cowards will not lead us out of the valley of death.  Only shepherds who have the spiritual strength, the Cardinal Gift of Fortitude, to brave the risk of worldly criticism, will be able to lead the American Catholic Church out of the valley of the Culture of Death and back on the road to the Civilization of Love which Pope John Paul II spoke of so often.

Why have so many priests succumbed to fear?  Why is it that their preaching no longer points out sin?  Fr. Garrigou-Lagrange provides us with an answer:


"The reason for this is not difficult to find.  A sermon is the result of the combined effort of all the priest's powers; it reveals his entire person; it is his struggle against the vices of the surrounding world."  In other words, if the preaching is unsound, it is because the priest's spiritual life is unsound.  Fr. Lagrange continues, "Everything in the priest cooperates in his preaching - study, reflection, his powers to compose and revise, the activity of his intellect, his imagination, his memory, his feelings, his voice.  Therefore, when he preaches, the priest stands exposed for all to study; some will be attracted, others will not.  Some will accept what he says, others will simply criticize.  So if the priest approaches his task from the human angle, he will say to himself: 'I cannot afford to lose my reputation; people of weight in the parish who take offense easily must be spared their feelings and not provoked; I must proceed warily so as not to incur criticism.'  In that way Christian eloquence is invaded by a profane eloquence in which the preacher looks after his own interests, not the glory of God or the saving of souls." (The Priest In Union With Christ, p. 156).

I've never been a fan of lying.  And this because Our Lord tells us that the Devil is the Father of all lies (John 8:44),  If it's lying you want, this Blog is not for you.  Forty years of lying has wrought so much damage to the American Catholic Church.  Archbishop Chaput is right, we are merely reaping the fruit of what we've planted.  St. Paul tells us that, "...the fruit of the Spirit is love, joy, peace, patience, kindness, generosity, faithfulness, gentleness, self-control.." (Galatians 5: 22).  But what fruit have we witnessed in the American Catholic Church?  The Church has been infected with dry-rot as so many Catholics have succumbed to the works of the flesh.

We need heroic shepherds.  Men who, like Blessed Miguel Pro, S.J., are willing to give their very lives for the Catholic Church and her teaching.
Because I do not believe in lying; because I believe in standing up for the Church's Magisterial teaching at all cost (and I have paid dearly), I have been banned from the Facebook Page of the North Quabbin Catholic Community which is now engaging in libel against me while publishing posts which threaten violence against my person.  And this from a community which regularly sings the song "All are welcome."  Yes....as long as they dissent from Church teaching or are not "too faithful" to the Magisterium.

Now the North Quabbin "Catholic" Community has published an angry post written by Kathleen M. Progen [no doubt because Father Krzysztof Korcz has been removed from Our Lady Immaculate and replaced as pastor - after the Bishop received numerous complaints about him from disaffected parishioners] in which she  slanders me by falsely asserting that I have said "hateful things" which were "disgusting" and then writes, "I want to go punch him....praying for him to see the error of his ways."  And the North Quabbin Catholic Community responds: "I have blocked him from this page."  To which Ms. Progen, a pillar of Catholic charity and welcoming herself, replies, "Thank you, whoever blocked him.  I wonder if he will have the guts to answer my chastising note to him.."

One can almost hear Ms. Progen at Our Lady Immaculate loudly singing:

Let us build a house
where love can dwell
And all can safely live,
A place where
saints and children tell
How hearts learn to forgive.

Built of hopes and dreams and visions,
Rock of faith and vault of grace;
Here the love of Christ shall end divisions;

Let us build a house where prophets speak,
And words are strong and true,
Where all God's children dare to seek
To dream God's reign anew.

Here the cross shall stand as witness
And a symbol of God's grace;
Here as one we claim the faith of Jesus:

Let us build a house where love is found
In water, wine and wheat:
A banquet hall on holy ground,
Where peace and justice meet.

Here the love of God, through Jesus,
Is revealed in time and space;
As we share in Christ the feast that frees us:

This even as she engages in calumny while proclaiming her desire to commit violence against me.  Father Peter Carota is right, progressive "Catholicism" is dying.  It is no match for authentic love as found in traditional Catholicism.


If the North Quabbin Catholic Community is in crisis today, it is no mystery.  Young people are not attracted by hatred and violence.  It is Gospel values they thirst for.  Thus far, the NQCC has offered not wheat but chaff.  And young people sense this. 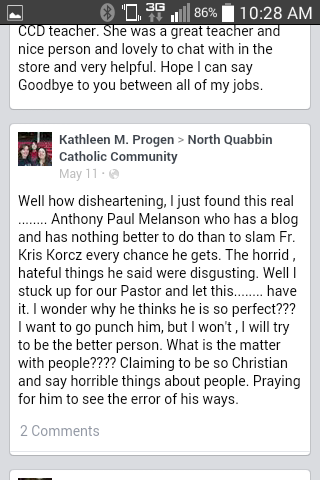