"The Bishop of Antwerp, Johan Bonny advocates an ecclesiastical recognition of homosexual relationships. The dogma that the Catholic Church can only accept male-female relationships, he put in question in an interview with this newspaper. "There should be a diversity of recognition forms."

With his plea Bonny, is one of the first church leaders who attacks the absolute monopoly of the male-female marriage. "We have to look inside the church for a formal recognition of the relationality which is also present in many gay couples. As a variety of legal frameworks in society exist for partners, he wants to instate a diversity of recognition forms in the church."

Bonny, the designated (in fact, for the time being, most likely) successor of Archbishop
André-Joseph Léonard, who will retire in 2015, believes that gay couples should be able to get a church blessing. Moreover, he argues that a homosexual relationship can also satify the criteria of a religious marriage. "The intrinsic values are more important to me than the institutional demand. The Christian ethic is based on lasting relationships where exclusivity, loyalty and care are central to each other.

Bringing up children
With a subtle formulation Bonny also puts the male-female Catholic monopoly for bringing up children in question. "Then there is the openness to new life, or at least the responsibility taken up by partners to be generous in what they provide to children."

In September, the Antwerp bishop wrote a letter to the Vatican on this matter. Among others, he include the idea that the church urgently needs to find a connection in modern society, explains why Bonny emphasises the matter. "Everyone gets to make his or her life with relationships, friendship, family and children's upbringing. We should not deny that this existed within the church injuries and traumas. Too many people were excluded for a long time."

Canon lawyer and the Rector of the (Cathcon-once) Catholic University of Leuven, Rik Torfs considers Bonny's message as a turning point: "Do not underestimate the significance of this.  Bonny advocates a  change in long-held unshakable principles, something that the dogmatic pontificates of John Paul II and Benedict XVI no bishop could afford to do. "

"It is manifest that the eternal law of God is the sole standard and rule of human liberty, not only in each individual man, but also in the community and civil society which men constitute when united. Therefore, the true liberty of human society does not consist in every man doing what he please, for this would simply end in turmoil and confusion, and bring on the overthrow of the state; but rather in this, that through the injunctions of the civil law all may more easily conform to the prescriptions of the eternal law . . . the binding force of the human laws is in this, that they are to be regarded as applications of the eternal law, and incapable of sanctioning anything which is not contained in the eternal law, as in the principle of all law . . . where a law is enacted contrary to reason, or to the eternal law, or to some ordinance of God, obedience is unlawful, lest while obeying man we become disobedient to God."

Human laws are "incapable of sanctioning anything which is not contained in the eternal law." This is crystal clear Catholic teaching. There is no room for doubt. All other "laws" are unjust and are, therefore, not laws at all. And Catholics are not bound to obey them. In fact, Catholics have a duty to resist them. As I mentioned in a previous post, "Any law supportive of same-sex 'marriage' is no law at all. This because any law which is promulgated must correspond to the divine law. No human authority can declare what is morally evil to be morally good. Laws permitting slavery, abortion, euthanasia, divorce and "marriages" between persons of the same gender are immoral, and therefore unjust (St. Thomas Aquinas, Summa Theologiae, I-II, q. 96, a.5)."


In our sin-sick and confused world, there are homosexuals who are now play-acting at getting married, much as a young boy might play at being a priest. We don't say that the child's play at being a priest really makes him a priest. Likewise, homosexuals might play at being married, but this doesn't make it so. We are sane when our minds conform to reality. I might tell people that I am Napoleon. But my saying so doesn't make me Napoleon. And if I really believe that I am Napoleon, I am not sane.

Men might actually believe that they have the right to change the definition of marriage, but this is merely symptomatic of an illusion which is rooted in pride. As such, it represents a form of insanity. Men are not free to change God's eternal law to suit their own pleasures. Recall the teaching of Pope Pius XI in his famous Encyclical "On Christian Marriage":

"First of all, let this remain the unchanged and unshakable foundation: Matrimony was neither established nor restored by man but by God. It has been protected, strengthened, and elevated not by the laws of men, but by those of God, the author of human nature, and of Christ who restored that same nature. Consequently, these laws cannot be changed according to men's pleasure, nor by any agreement of the spouses themselves that is contrary to these laws. This is the teaching of Sacred Scripture (see Gen 1:27; 2:22f.; Mt 19:3ff.; Eph 5:23ff.); this is the constant, universal tradition of the Church; this is the solemn definition of the holy Council of Trent, which in the words of Sacred Scripture teaches and reasserts that the permanent and indissoluble bond of matrimony, its unity and strength, have their origin in God."

The Catechism of the Catholic Church, Nos. 1603-1605, explain marriage in the order of creation:

"The intimate community of life and love which constitutes the married state has been established by the Creator and endowed by him with its own proper laws. . . . God himself is the author of marriage." The vocation to marriage is written in the very nature of man and woman as they came from the hand of the Creator. Marriage is not a purely human institution despite the many variations it may have undergone through the centuries in different cultures, social structures, and spiritual attitudes. These differences should not cause us to forget its common and permanent characteristics. Although the dignity of this institution is not transparent everywhere with the same clarity, some sense of the greatness of the matrimonial union exists in all cultures. "The well-being of the individual person and of both human and Christian society is closely bound up with the healthy state of conjugal and family life."


God who created man out of love also calls him to love the fundamental and innate vocation of every human being. For man is created in the image and likeness of God who is himself love. Since God created him man and woman, their mutual love becomes an image of the absolute and unfailing love with which God loves man. It is good, very good, in the Creator's eyes. And this love which God blesses is intended to be fruitful and to be realized in the common work of watching over creation: "And God blessed them, and God said to them: 'Be fruitful and multiply, and fill the earth and subdue it.'"


Holy Scripture affirms that man and woman were created for one another: "It is not good that the man should be alone." The woman, "flesh of his flesh," his equal, his nearest in all things, is given to him by God as a "helpmate"; she thus represents God from whom comes our help. "Therefore a man leaves his father and his mother and cleaves to his wife, and they become one flesh." The Lord himself shows that this signifies an unbreakable union of their two lives by recalling what the plan of the Creator had been "in the beginning": "So they are no longer two, but one flesh."

Again, we may choose to reject these truths. But in so doing, we lose our grip on sanity as it were. In the words of the late (great) F.J. Sheed:

"..if we see anything - ourself or some other man, or the Universe as a whole or any part of it - without at the same time seeing God holding it there, then we are seeing it all wrong. If we saw a coat hanging on a wall and did not realize that it was held there by a hook, we should not be living in the real world at all, but in some fantastic world of our own in which coats defied the law of gravity and hung on walls by their own power. Similarly if we see things in existence and do not in the same act see that they are held in existence by God, then equally we are living in a fantastic world, not the real world. Seeing God everywhere and all things upheld by Him [such as marriage, my note] is not a matter of sanctity; but of plain sanity, because God is everywhere and all things are upheld by Him...To overlook God's presence is not simply to be irreligious; it is a kind of insanity, like overlooking anything else that is actually there." (Theology and Sanity, p.6).

The choice is ours: We either view marriage within the context of the order of creation with God as its Author, or we sink into insanity.

Bishop Bonny has made his choice.  Let's see if Pope Francis will muster the necessary fortitude and moral integrity to do the right thing and remove him from office. 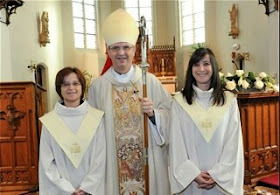