Democrats created and own the Confederate Flag...

Writing for National Review, Deroy Murdock quotes Governor Nikki Haley, referring to the Confederate Flag, as saying, "My hope is that by removing a symbol that divides us, we can move forward as a state in harmony."

Then Murdock correctly notes, "Haley, a rising Republican star, is correct to lower the Confederate flag. It has reflected Democratic racial oppression since it was stitched together in 1861, and has been hoisted by Democrats ever since. Just as Republicans — led by President Abraham Lincoln — valiantly crushed the Democrat-run Confederacy, Republicans proudly should banish the Stars and Bars to private property and history museums. They also should remind Americans that Democrats waved this frightful banner until very recently.

As the Civil War began, the Army of Northern Virginia, led by eventual Democratic activist Robert E. Lee, adopted the battle flag that is under contention today. It became the secessionists’ national banner in 1863. Its designer, William T. Thompson, praised it in the Savannah Daily Morning News that May 4:

As a national emblem, it is significant of our higher cause, the cause of a superior race, and a higher civilization contending against ignorance, infidelity, and barbarism. Another merit in the new flag is, that it bears no resemblance to the now infamous banner of the Yankee vandals.

Two years later, that flag was in tatters. The North beat the South, and the Confederacy was gone with the wind.

How did this symbol of a pro-slavery breakaway republic wind up atop South Carolina’s state capitol? As the debate raged over civil rights in 1961, the Democratic legislature under Governor Ernest “Fritz” Hollings, a Democrat, raised the Stars and Bars to mark the “Confederate War Centennial.”

About that time, Hollings presented a Confederate flag to President John F. Kennedy, another Democrat.

Father Lawrence Lovasic, in his book The Hidden Power of Kindness, explains that, "You practice professional hypocrisy when, in public office or business, you speak against some evil and in reality practice it yourself, or when you complain of losing money while you yourself are making an unjust profit..." (The Hidden Power of Kindness, pp. 138-139).

These words apply to Democrats like President Obama who attempt to distance themselves from the negative stigma attached to the Confederate Flag while attempting to manufacture a narrative which lays the flag at the doorstep of Republicans or Conservatives in general.

President Obama, your hypocrisy is showing. 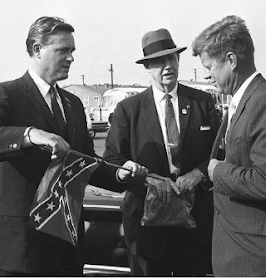 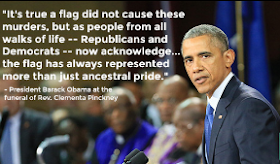