Francis the Destroyer has absorbed the poison of Hell...

In a review some years ago of Michael S. Rose's book entitled, "Goodbye, Good Men," Rev. Robert J. Johansen noted that, "There is too much evidence of the abuse of authority in certain dioceses and seminaries to dismiss Rose’s claims as baseless. It is still the case, even in a seminary with a reputation for orthodoxy such as St. Charles, that seminarians would not openly admit to members of the formation committee that they attended a licit (under the Ecclesia Dei indult) Tridentine liturgy for fear of being branded a “reactionary” and hounded out. I know many priests and seminarians who were subjected to harassment similar to that which Rose describes. I personally was turned away by a Midwestern seminary in the mid-1980’s for being “rigid”, “doctrinaire”, and “lacking in pastoral sensitivity.” These terms are recognized “code words” for describing seminarians and candidates who are loyal to Church teaching and discipline, and are attached to traditional forms of piety and devotion.

The genius of using such terms is that they do have a legitimate use: There really is such a thing as being rigid or inflexible; there really are priests who lack sensitivity to people’s needs or situations. By co-opting and re-defining such words, those who wished to advance their own agenda were able to masquerade as agents of the Church. Rose is correct in identifying the existence of these people and their agenda and the damage they caused." See here.

"Rigid," "doctrinaire," "lacking in pastoral sensitivity," these are indeed code words used by liberals who are Catholic in name only and for whom the Church's precepts are merely "man-made rules."  Such as Francis the Destroyer.  See my last post.

And he's at it again.  Now the False Prophet, who is inspired not by Heaven but by the poison of Hell, is suggesting that behind orthodoxy, behind fidelity to Jesus Christ and His Revelation, is...wickedness*.  See here.

But, as yet another member of the hierarch has reminded us (this time a Cardinal, See here), the faithful are not bound to follow a Pope who betrays the Church.

What Saint Louis de Montfort has to say about enemies of the Rosary Confraternity applies here because the Most Holy Rosary is a contemplation of Divine Revelation, which contains moral norms described by Francis as mere "rules and regulations":

"It is easy to see that they have absorbed the poison of hell and that they are inspired by the devil - for nobody can condemn devotion to the Holy Rosary without condemning all that is most holy in the Catholic Faith, such as the Lord's Prayer, the Angelic Salutation and the mysteries of the life, death, and glory of Jesus Christ and of His Holy Mother."

The rough Beast even now slouches toward Bethlehem, waiting to be "born." In truth, he is already here, his message being prepared by his willing dupe, his ecclesiastical puppet, his Masonic disciple.  That message will be that man has come of age, that the Church's moral norms are now outdated, that traditional-minded Christians are rigid and even evil, something to be eradicated - like useless weeds interfering with the progress of a New Garden where men shall be like gods.

The Reign of the Beast is soon to begin. But his reign is short.  His history, and that of his whoring pseudo-prophet, a modern-day Judas, has already been written.  And its end is the eternal lake of fire. 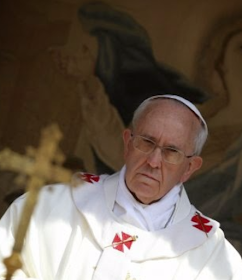