America, as this CNN article notes, is the most generous nation in the history of the world.  This nation gives more in monetary and other aid such as good and medicine than any other.

In addition, as the article notes, "Generations of Americans have sacrificed their lives to fight and die for freedom around the world."

But for Francis, driven by an anti-Capitalist and Socialist agenda, the United States has become "blind and insensitive" toward others.  See here.

This from a man who celebrated Holy Mass under the image of the Socialist psychopath Che Guevara, see here and who welcomes the sociopathic Raul Castro to the Vatican, see here.

On fire to build man's world.

Malachi Martin, in his book “The Jesuits: The Society of Jesus and the Betrayal of the Roman Catholic Church,” says that, “Those who..know the history of Liberation Theology..may point out that Gutierrez’s work [Father Gustavo Gutierrez, author of A Theology of Liberation] was inspired by a 1968 Conference of Latin American bishops at Medellin, near Bogota, in Colombia, where the delegates highlighted the plight of the poor, and the needy to remedy their awful conditions…

Essentially, Liberation Theology is the answer to that summons to the Church codified so many years before by Maritain – to identify itself with the revolutionary hopes of the masses. The difference, perhaps, insofar as there is one, is that while Maritain adopted a theology of history built on a misapprehension of Marxist philosophy, Liberation Theologians adopted a theology of politics built on Soviet tactics. In essence, the propagators of Liberation Theology took the current of theological thought developed in Europe and applied it to the very concrete situations in Latin America. Suddenly, theological and philosophical theory became the pragmatic proposals and actual programs for changing the face of all social and political institutions in Latin America….

Liberation Theology turned its back on the entire scope of Scholastic Theology, including what was sound in Maritain. It did not base its reasoning on papal teaching, or on the ancient theological tradition of the Church, or on the Decrees of the Church’s Ecumenical Councils. In fact, Liberation Theology refused to start where Councils and Popes had always started: with God as Supreme Being, as Creator, as Redeemer, as Founder of the Church, as the One Who had placed among men a Vicar who was called the Pope, as Ultimate Rewarder of the Good and Punisher of the Evil. Rather, Liberation Theology’s basic presumption was ‘the people,’ sometimes indeed ‘the people of God.’ ‘The people’ were the source of spiritual revelation and religious authority. What mattered in theology was how ‘the people’ fared here and now, in the social, political, and economic realities of the evolving material world. The ‘experience of the people was the womb of theology,’ was the consecrated phrase.

The second promise of Liberation Theology was even more exciting than freedom from Rome’s theology..” (The Jesuits: The Society of Jesus and the Betrayal of the Roman Catholic Church, pp. 308-309).

Under the banner of “liberation,” many in the Church’s hierarchy began to enlist the Church’s resources to advance the Marxist plan of revolution. Having abandoned the Church’s supernatural mission – building the Kingdom of God, these confused clerics began to turn exclusively toward a new goal: that of building a new world centered on man, a City of Man.

Fr. Martin explains how the Jesuits succumbed to this apostasy: “Classical Jesuitism, based on the spiritual teaching of Ignatius, saw the Jesuit mission in very clear outline. There was a perpetual state of war on earth between Christ and Lucifer. Those who fought on Christ’s side, the truly choice fighters, served the Roman Pontiff diligently, were at his complete disposal, were ‘Pope’s Men.’ The ‘Kingdom’ being fought over was the Heaven of God’s glory. The enemy, the archenemy, the only enemy, was Lucifer. The weapons Jesuits used were supernatural: the Sacraments, preaching, writing, suffering. The objective was spiritual, supernatural, and otherworldly. It was simply this: that as many individuals as possible would die in a state of supernatural grace and friendship with their Savior so that they would spend eternity with God, their Creator…

The renewed Jesuit mission debased this Ignatian ideal of the Jesuits. The ‘Kingdom’ being fought over was the ‘Kingdom’ everyone fights over and always has: material well-being. The enemy was now economic, political, and social: the secular system called democratic and economic capitalism. The objective was material: to uproot poverty and injustice, which were caused by capitalism, and the betterment of the millions who suffered want and injustice from that capitalism. The weapons to be used now were those of social agitation, labor relations, sociopolitical movements, government offices…” (The Jesuits, p. 478).

In this light, we can better understand Pope Francis' speech before Congress. The Pope called on Americans to open themselves to the world and not to see things in terms of good and evil, the righteous and unrighteous.  This, of course, is unscriptural. (See 2 Corinthians 6: 14, 15 and Ephesians 5: 11 for example).

As Fr. Vincent Miceli, S.J., explained in his essay on Call to Action entitled “Detroit: A Call to Revolution in the Church”: “The following are some of the demands the Church simply cannot fulfill for such is not her mission: 1. Wipe out poverty, ignorance, prejudice and war. 2. Democratize the whole world. 3. Stop the sale of arms everywhere. 4. Back the E.R.A. as a constitutional amendment. Like her Saviour, the Church will not turn stones into bread, thereby becoming the Mother of Socialism or a millennium of this world..’


"..the 'theologies of liberation', which reserve credit for restoring to a place of honor the great texts of the prophets and of the Gospel in defense of the poor, go on to a disastrous confusion between the 'poor' of the Scripture and the 'proletariat' of Marx. In this way they pervert the Christian meaning of the poor, and they transform the fight for the rights of the poor into a class fight within the ideological perspective of the class struggle. For them the 'Church of the poor' signifies the Church of the class which has become aware of the requirements of the revolutionary struggle as a step toward liberation and which celebrates this liberation in its liturgy." (Congregation for the Doctrine of the Faith, "Instruction on Certain Aspects of the 'Theology of Liberation,'" No. 10).

The supernatural faith of Catholicism is being watered down for the sake of a new humanitarian religion.  Dialogue is key for this new religion which has abandoned the notion that we must, "Let love be without dissimulation. Hating that which is evil, cleaving to that which is good." (Romans 12: 29). 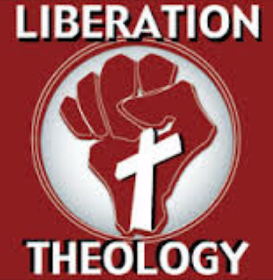