Francis: I don't believe in judging...unless you're Donald Trump

During an interview published on Saturday, Pope Francis said he would wait and see what a new President Donald Trump does before judging. The Pope was interviewed on Friday at the Vatican by the Spanish newspaper El Pais.

Francis went on to tell the interviewer that he doesn’t like “judging people early. We’ll see what Trump does.”

I thought Francis said, "Who am I to judge"?  Oh yeah, that only applies to homosexual persons, socialist genocidal maniacs and leftist-leaning politicians such as Barack Obama who embrace the pro-abortion Culture of death.

Is Barack Obama "non-Christiano" for his support of abortion?  No word from Francis. 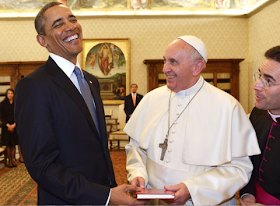