Most people think they can’t make a difference, or are too timid to try. Here is an example of what just one person can do to fight back!

An elderly woman in ultra-liberal Carlisle, Mass. had the nerve to publicly criticize the 'gay' flag outside of a church in the center of town. She caused such an inflamed reaction that it was reported in Boston’s NBC-TV evening news. But she’s not backing down -- which inflames the leftist reactionaries even more!

 
Sally Naumann, an 85-year-old resident of Carlisle and a longtime MassResistance activist, had had enough. She was very upset that the Unitarian Church in the center of town is flying a 'gay' rainbow flag outside. She is distressed because people she knows have died of “gay”-related diseases. She strongly believes the homosexual lifestyle should not be promoted."

The truth is just too much for the liberal residents of Carlisle.  Even though the physical, mental and spiritual dangers of the homosexual "lifestyle" have been very well documented, the liberal ideologues of Carlisle cannot, and will not, tolerate anyone who has the audacity to proclaim the truth.

And so this year's Walter Duranty Award goes to the town of Carlisle, Massachusetts.  Perhaps the town should adopt the ostrich as its mascot? 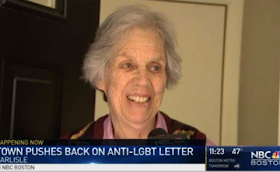