Father Piotr Pawlus of Saint Mary's Church in Orange, Massachusetts: Jesus had warts and was bested intellectually by the Canaanite Woman

As this EWTN article explains:

This truth was not acknowledged by Father Piotr Pawlus in a homily given during the Vigil Mass at Saint Mary's Church in Orange, Massachusetts on the Gospel reading (Matthew 15: 21-28).

On the contrary, in his homily on the Canaanite woman, Father Pawlus asserted that the Gospel passage shows a "Jesus with warts" and that this passage reveals the only time Jesus was "bested in an argument."

I'm sure this nonsense appeals to the feminist man-hating status quo at Saint Mary's Church, a Church crippled by misandry and fear of masculinity.  It is, nevertheless, asinine theology.

As the Haydock commentary explains:

"Our Lord crosses the wishes of the Canaanite woman, not that he intended to reject her, but that he might bring to light the hidden and secret treasure of her virtue. Let us admire not only the greatness of her faith, but likewise the profoundness of her humility; for when our Saviour called the Jews children, so far from being envious of another's praise, she readily answers, and gives them the title of lords; and when Christ likened her to a dog, she presently acknowledges the meanness of her condition. (St. Chrysostom, hom. liii.) He refused at first to listen to her petition, says the same saint, to instruct us with what faith, humility, and perseverance we ought to pray. To make his servants more sensible of his mercy, and more eager to obtain it, he often appears to pay no attention to their prayers, till he had exercised them in the virtues of humility and patience. Ask, and you shall receive; knock, and it shall be opened to you..."

Since Jesus is God, we must say that from the very beginning of His life He knew all things and all possible things.

Pope Pius XII, in his great Encyclical on the "Mystical Body" - Mystici Corporis - given on June 29, 1943, taught: "By that blessed vision which He enjoyed when just received in the womb of the Mother of God, He has all the members of the Mystical Body continuously and perpetually present to Himself." In other words: His human soul saw the vision of God at once, and in it all knowledge is at hand. In another Encyclical, "Sempiternus Rex," in 1951, the same Pope complained many were not accepting his teaching. Then in still another Encyclical, "Haurietis aquas," in 1956, he clearly repeated his earlier teaching. Further, on July 24,1966, the Congregation for the Doctrine of the Faith under Pope Paul VI, complained that many were still not accepting. Clearly, the repeated teaching shows the Church means to make this definite and definitive, namely, that the human soul of Jesus, from the first instant, saw the vision of God, in which all knowledge is accessible.

The notion that a sinful woman, a mere creature, somehow bested Our Lord in verbal contest is the sort of liberal bovine scatology that only the mentally ill, and radical feminists (in truth the same thing) can swallow.

Pray for this confused priest.  His warts are showing! 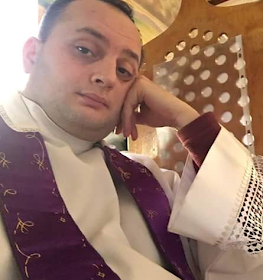