We live in a time when the arrogance of men is being broken.  How often do we hear some ignoramus on television proclaiming that we are "America Strong" or "Boston Strong."

Chastisements are being unleashed on a sin-sick world which has become filled with satanic pride.

Locusts are destroying crops throughout the Middle East and Africa, a plague which will also affect the Western nations including the United States.  See here.

And while men have been boasting about how "strong" they are, an invisible enemy, a microscopic virus, is now overwhelming them.  See here.

The people of Nineveh repented of their sins and their city was spared from disaster. The spirit of penance which saved them from chastisement was expressed through the sackcloth and ashes. We are told in Sacred Scripture that, "The word of the Lord came to Jonah a second time: Set out for the great city of Nineveh, and announce to it the message that I will tell you. So Jonah set out for Nineveh, in accord with the word of the Lord. Now Nineveh was an awesomely great city; it took three days to walk through it. Jonah began his journey through the city, and when he had gone only a single day’s walk announcing, “Forty days more and Nineveh shall be overthrown,” the people of Nineveh believed God; they proclaimed a fast and all of them, great and small, put on sackcloth. When the news reached the king of Nineveh, he rose from his throne, laid aside his robe, covered himself with sackcloth, and sat in ashes. Then he had this proclaimed throughout Nineveh: 'By decree of the king and his nobles, no man or beast, no cattle or sheep, shall taste anything; they shall not eat, nor shall they drink water. Man and beast alike must be covered with sackcloth and call loudly to God; they all must turn from their evil way and from the violence of their hands. Who knows? God may again repent and turn from his blazing wrath, so that we will not perish.' When God saw by their actions how they turned from their evil way, he repented of the evil he had threatened to do to them; he did not carry it out." (Jonah 3: 1-10).


Where is the fast in our "strong" culture? Where is the penance? Saint Paul tells us that all men have the basic moral law before them, the Ten Commandments written in their hearts. All men are capable of knowing good from evil:

"For what can be known about God is evident to them, because God made it evident to them. Ever since the creation of the world, his invisible attributes of eternal power and divinity have been able to be understood and perceived in what he has made. As a result, they have no excuse.." (Romans 1: 19-20).

But excuses are all we find today.  Not to mention a celebration of sin - even that sin which is most detestable - sodomy. As Father Albert J. Hebert, S.M. put it, "All great pagan judicial systems admitted the fact of wrong-doing and their legal systems prescribed punishment for it. It is only in our day that there is such a widespread denial of the existence of sin and moral laws. This makes God appear as the Creator of evil, and God hates this blasphemy, pride, and hypocrisy on the part of His creature man...Today, persons great and lowly commit sin, deny it and even blasphemously call it virtue. For example, active homosexuals and lesbians call their perverse practices 'love' and demand the legal status of normal married man and wife."

You don't believe the Lord would send locusts or an epidemic (or at least allow them in His permitting Will?).  Then you are ignorant of His Word.

The choice is yours.  We can bend our knee before the Lord in a spirit of repentance or He will bend our knees through Chastisement which are an act of His mercy. 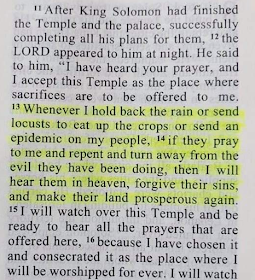