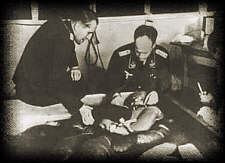 "I am absolutely convinced that the gas chambers of Auschwitz, Treblinka, and Maidanek were ultimately prepared not in some ministry or other in Berlin, but rather at the desks and in the lecture halls of nihilistic scientists and philosophers."
- Viktor E. Frankl, 1905-1997.


"Having abandoned the God of love, the Supreme Creator, 21st-century man is now ready to worship himself and to usurp the divine powers of creation and destruction. In the words of Dr. Edmund Leach of King's College at Cambridge: 'The scientist can now play God in his role as wonder-worker, but can he - and should he - also play God as moral arbiter?...There can be no source for these moral judgments except the scientist himself. In traditional religion, morality was held to derive from God, but God was only credited with the authority to establish and enforce moral laws because He was also credited with supernatural powers of creation and destruction. Those powers have now been usurped by man, and he must take on the moral responsibility that goes with them' (Edmund Leach, "We Scientists Have the Right to Play God," The Saturday Evening Post, November 16, 1968, p. 16).

But make no mistake about it, when man becomes God society becomes, in the words of the French philosopher Gabriel Marcel, 'a termite colony.' We are still in the twilight. But unless we take a stand now, we will have the Moloch state. As at Auschwitz, men will determine who has quality of life and who should be "mercifully terminated."
Paul Anthony Melanson at 3:40 PM
Share