It's time for the CDF to investigate the Worcester Diocese

In an article for The American Catholic which may be found here, The Motley Monk writes:


"It’s pretty easy to tell that the folks over at the National Catholic Reporter (NCR) aren’t happy campers these days. Some of their heroes fighting on the front lines for women’s ordination are being “disciplined.”
According to a recent NCR article:


A longtime peace and human rights activist arrested countless times, Franciscan Fr. Jerry Zawada has been removed from public ministry for concelebrating Mass with a woman priest in 2011.

Poor Fr. Zawada! After all he’s done over the decades to promote the cause of social justice. He’s been jailed numerous times and now at the age of 76, one would think the Vatican would overlook Fr. Zawada’s minor infelicity for merely concelebrating “Mass” with the Roman Catholic “WomanPriest,” the Rev. Ms. Janice Sevre-Duszynska.

The enemy in the NCR’s narrative is the Vatican’s Congregation for the Doctrine of the Faith (CDF), which reviewed documentation related to the November 22, 2011 “Mass.” NCR obtained a copy of the CDF’s private letter which stated:


Having carefully examined the acts of the case, and the vota of the former Minister General and the Rev. Zawada’s Provincial Superior, this Dicastery has decided to impose on Rev. Jerome Zawada, OFM, a life of prayer and penance to be lived within the Queen of Peace Friary in Burlington, Wisconsin.

The letter also forbids Fr. Zawada from presenting himself in public as a priest or celebrating the sacraments publicly. However, Fr. Zawada is allowed to concelebrate Mass with other friars at the friary and in private.

Zawada isn’t too pleased. He told the NCR:


I don’t mind the prayer part, but when they called, when they say that I need to be spending time in penance, well, I’m not going to do penance for my convictions and the convictions of so many others, too.

Apparently, CDF isn’t going to wink and ignore any priest who concelebrates “Mass” with so-called “WomenPriests.”
And that’s only the cases that the priests involved have made public.
“You’re out!” the umpire yells after a batter takes three strikes.
And, by the way, the baseball season opens today.
Perhaps those priests who support the cause for the ordination of women should place their money on the Chicago Cubs winning the World Series this year. Both have about an equal chance of happening anytime soon."


To read the NCR article, click on the following link:
http://ncronline.org/news/peace-justice/longtime-peace-activist-removed-ministry-after-concelebrating-mass-woman-priest

For years I have fought dissent within the Worcester Diocese.  And part of that dissent has been the push for women's ordination.  Although my articles and letters to the editor of The "Catholic" Free Press have been regularly censored, Stacy Trasancos has been given space in that publication for a regular column.  This most likely because she has advanced the idea that women's ordination might be a possibility.  A while back I exposed how Trasancos had written: "We know that by the end of the first century the Roman Catholic Church was established and there can be little doubt that the cultural influences of that time and place affected the doctrine [that only men are called to the ministerial priesthood].  We do also know that the Church has evolved over time and that part of theology's goal is to communicate faith to changing cultures.  For these reasons, maybe the question of women in the priesthood will remain unsettled.  There isn't any hard logic to support the idea that the concrete forms of the ecclesiastical offices cannot be changed....Whether women should or will someday be priests, isn't for this single writer to say."

See here for my response.

Of course, because I have stood against such nonsense, I have been ostracized from this diocese.  But not dissidents such as Mary Donovan of the Worcester "Commission for Women."  Writing for The Catholic Free Press back in 1992, Ms. Donovan implied that women are not "active participants in the worship of God" and that women should be able to "dispute interpretation" of Church doctrine. In an article entitled "Save the women for the Church," she wrote: "Most of us on the Commission are diehards, women who decided long ago that women should have a place in the Church and that the Church needed women...What we want is simple.  We want to be considered active participants in the worship of God.  We want to move from the passive role where men study the Word of God, interpret it and relay the message to us.  We want to share the study, to discuss, refine, enlarge, enhance, dispute interpretation if necessary, and deliver the good news with equal stature and credibility.  We know that structure that exists today has no stairway for women that go to the top floor.  We know what problems exist in renovating..." (May 22, 1992 edition of The Catholic Free Press).

It's not renovation that Ms. Donovan stood for but wreckovation.  Her ideology was rooted in pride and falsehood.

In another article published in the diocesan newspaper, Ms. Donovan insisted that there are, "..women who sense the same gifts within themselves as men who feel called to the service of God." (Women walk a Tightrope, January 29, 1992 edition of The Catholic Free Press).

While Mary Donovan and her cohorts were demanding women's ordination and the right to "dispute interpretation" of the Church's teaching, the Second Vatican Council had already taught authoritatively that, "...the task of authentically interpreting the Word of God, whether written or handed on, has been entrusted exclusively to the living teaching office of the Church, whose authority is exercised in the name of Jesus Christ." (Dei Verbum, No. 10).
Mary Donovan and other sophomoric souls throughout the Worcester Diocese have openly rejected the teaching of Vatican II and the perennial teaching of the Catholic Church, as exemplified in the post conciliar document entitled "The Ministerial Priesthood in the Light of the Mystery of Christ" that, "..we can never ignore the fact that Christ is a man.  Therefore, unless one is to disregard the importance of this symbolism for the economy of Revelation, it must be admitted that, in actions which demand the character of ordination and in which Christ Himself, the Author of the Covenant, the Bridegroom and Head of the Church, is represented, exercising His ministry of salvation - which is in the highest degree the case of the Eucharist - His role must be taken by a man."
But those who shout Non Serviam along with Lucifer will not be silent.  No amount of truth will produce the slightest crack in their wall of conviction.  The time has come to discipline them.  If necessary, with excommunication.

Such an anathema would amount to an expression of supreme charity. 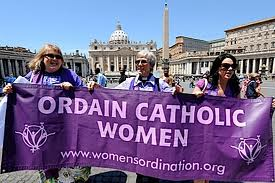