Islam is a manifestation of Antichrist

"666 indicated twice, that is to say, for the second time, expresses the year 1332, thirteen hundred and thirty two in this period of history, the antichrist is manifested through a radical attack on the faith in the word (Parola) of God. Through the philosophers who begin to give exclusive value to science and then to reason, there is a gradual tendency to constitute human intelligence alone as the sole criterion of truth. There come to birth the great philosophical errors which continue through the centuries down to your days. The exaggerated importance given to reason, as an exclusive criterion of truth, necessarily leads to the destruction of faith in the Word (Parola) of God. Indeed, with the Protestant Reformation, Tradition is rejected as a source of Divine Revelation, and only Sacred Scripture accepted. But even this must be interpreted by means of the reason, and the authentic Magisterium of the herarchic Church, to which Christ has entrusted the guardianship of the deposit of faith, is obstinately rejected. Each one is free to read and to understand Sacred Scripture according to one's personal interpretation. In this way, faith in the Word (Parola) of God is destroyed. The work of the antichrist, in this period of history, is the division of the Church and the consequent formation of new and numerous Christian confessions which gradually become driven to a more and more extensive loss of the true faith in the Word (Parola) of God.

"666 indicated thrice, that is to say, for the third time, expresses the year 1998, nineteen hundred and ninety-eight. In this period of history, Freemasonry, assisted by its ecclesiastical form, will succeed in its great design; that of setting up an idol to put in the place of Christ and of His Church. A false christ and a false church. Consequently, the statue built in honor of the first beast, to be adored by all the inhabitants of the earth and which will seal with its mark all those who want to buy or sell, is that of the antichrist. You have thus arrived at the peak of the purification, of the great tribulation and of the apostasy. The apostasy will be, as of then, generalized because almost all will follow the false christ and false church. Then the door will be open for the appearance of the man or of the very person of the antichrist.   "That is why, beloved children, I have wanted to enlighten you concerning the pages of the Apocalypse which refer to the times you are living through. This is to prepare you with me, for the most painful and decisive part of the great struggle which is on the point of being fought out between your Heavenly Mother and all the forces of evil have been let loose.  "Take courage! Be strong, my little children. To you befalls the duty, in these difficult years, of remaining faithful to Christ and to His Church, putting up with hostility, struggle and persecution. But you are a precious part of the little flock, which has the task of fighting against, and in the end of conquering, the powerful force of the antichrist. I am forming you all, defending you and blessing you." (To The Priests: Our Lady's Beloved Sons, Message 407).

Whoever denies that Jesus is God is of Antichrist.  Bearing that in mind, let's look at what Dr. Mark Durie has to say about the Muslim "Jesus":

"... the time and the place for [the poll tax] is before the final descent of Jesus (upon whom be peace). After his final coming, nothing but Islam will be accepted from them, for taking the poll tax is only effective until Jesus' descent (upon him and our Prophet be peace) ..." (The Reliance of the Traveller. Trans. Nuh Ha Mim Keller, p. 603).

Ibn Naqib goes on to state that when Jesus returns, he will rule ‘as a follower’ of Muhammad. 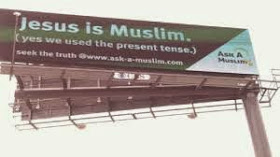