Pope Francis welcomes a sociopath at the Vatican

Not many people, including Catholics, are aware of Raúl Castro's background. The brother of Fidel is in fact a sociopath who served as an executioner during the revolution as well as after his brother took power.

Raúl was known for his ruthlessness and brutality. Years after the revolution, the homicidal maniac, who quite possibly is demon possessed, suggested that his nickname should be "Raúl the Terrible" for his role in hundreds of killings. He even executed a close friend, Gen. Arnaldo Ochoa, on orders from Fidel in 1989.

Cubans who dare to criticize the government or the policies of this psychopath, have much to fear.  See here.

But the murderous psychopath found himself entirely welcome at the Vatican. As this article explains:

"Cuban President Raul Castro paid a call Sunday on Pope Francis at the Vatican to thank him for working for Cuban-U.S. detente — and said he was so impressed by the pontiff he is considering a return to the Catholic church’s fold.

“Bienvenido (welcome)!” Francis said in his native Spanish, welcoming Castro to his studio near the Vatican public audience hall. The Cuban president, bowing his head, gripped Francis’ hand with both of his, and the two men began private talks. The meeting lasted nearly an hour, as the Argentine-born Francis and Castro spoke in Spanish."

Is there any doubt where Francis is taking the Church?  I'm a devout Catholic, a loyal son of the Church, a cradle Catholic who accepts and defends the Magisterial teaching of the Church.  I live a chaste (celibate) life. I feel called to the ministerial priesthood. When I left several comments at the Pope's Facebook page highlighting the fact that my Diocese won't even acknowledge my requests to APPLY for the priesthood and to initiate a DISCERNMENT process, I received no welcome, no assistance, not even a bienvenido-  a welcome.

So, a Socialist psychopath who has executed so many people that he himself wanted to be nicknamed "The Terrible" finds a hearty welcome and a personal one hour audience.

And Catholics like myself who embrace the Church's Tradition or who (God forbid), have a devotion to the Latin Mass, get....well....relegated to the ghetto.

Got it....must pray many more Rosaries for the Church and her leadership. 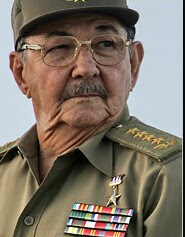