The Kolvenbach Report and Francis: What did it warn of?

"The superiors of religious orders and societies are consulted by the Congregation for Bishops when their priestly members are considered for an appointment as bishop.

It is a well known and established information in the Holy See (as it was in Buenos Aires before) that, when Father Jorge Mario Bergoglio, SJ, was tipped by the then-Archbishop of Buenos Aires, Cardinal Quarracino, to become his auxiliary, in 1992, the then-Superior General of the Society of Jesus, Father Peter Hans Kolvenbach -- who was struggling to recover some credibility to his order after the severe intervention by Pope John Paul II and the removal of Arrupe and Arrupists who had run the great Society to the ground following the Council -- wrote an unfavorable report on the possible nomination.

The report is said to be highly detailed, and to reveal all the character inclinations that are evident in the personality of the current Pope.

Now, it would be one of the scoops of the century if a journalist revealed to the world this most important historical document. The "grown-up" Catholics of our age, "emancipated" by Vatican II, can surely take what Father Kolvenbach was trying to warn Pope John Paul II and his advisers about Father Bergoglio. And surely the new enlightened Vatican can be transparent enough to let all Catholics and all others know the contents of such a precious report.

Time to let the sunlight in."

Precisely.  What was in that report?  Was concern expressed over possible mental illness in Father Bergoglio? After all, he has admitted himself  that he suffers from neuroses.

Pope Francis has admitted that he has "some nerve problems" which require treatment as well as various neuroses. See here. A neuroses is defined as, "A relatively mild mental illness* that is not caused by organic disease, involving symptoms of stress such as depression, anxiety, obsessive behavior and hypochondria."

* Francis has been described as a "sociopath." See here. 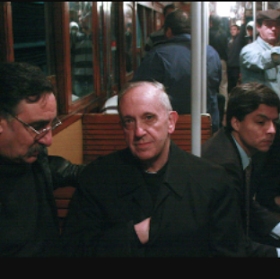