The counterfeit church prophesied by Blessed Emmerich has arrived

From The Stumbling Block:


"The world is reacting to the latest spate of Catholic attacks from the man in white.  Most will agree with him on contraception.  Many will be furious about countries, borders, and the true freedom of the Gospel.  All of them will feel a despair somewhere deep within their souls.  Faithful voices are clear-headed and angry.  The respectable catholic press has closed ranks with some contempt for decent people.

Does it make your skin crawl to hear Francis say, ‘Blessed Paul VI?’

I’m not the only Christian who feels discouraged and helpless in the face of this statist political tool, ‘Pope Francis.’  The entire world and its machine honor him as Pope and perhaps he is, but it really doesn’t matter because he’s not Catholic.  He’s not part of the Church Militant.  Many may read this and say it’s sedevacantism, but its not.  I’m not claiming to know Francis’ actual status.  I’m simply saying that spiritually what difference does it make to God when you’re in the Hell line anyway?  If you’re standing in the Hell line does Christ consider you part of his Church?  No.  He doesn’t.

You may ask, “Are you saying Francis is going to Hell?”  Well, he’s a heretic and despite what so many ‘catholics’ say today, Heaven is for the faithful departed.  Simply put, Francis is a pope who teaches heresy.  Do the conditions exist for canonical heresy?  I don’t know, but I suggest any canonist who continues to dismiss the Pope’s heresy should place himself before the throne of God.

Contraceptive sex is not a moral response to any possible negative consequence of birth, much less so for a trumped-up political and faux-scientific health reason.

It’s sacrilege for Lutherans to receive Holy Communion if their consciences happen to approve.

These things are all blatantly heretical and there are many, many more. Don’t spin me about context, formality and interpretive angles. The Church cannot be led by a heretic.  It will only die and it surely is dying.  It doesn’t matter if if someone funds a new building to teach Human Ecology at Fordham.

The Church Militant is being smothered by an official parasite Church.  Francis has made the reality even more stark.  Today everywhere is China.  There is the state church and the true Church.  But unlike the Chinese underground Church in our time, we can no longer look to another land for a vicar who speaks the truth.  Still, that doesn’t mean we can forget Christ or the Church’s doctrine.

The question is:  How do we, the true and faithful Church, respond to a false Church and its unCatholic Pope?  What does God want us to do?  I can think of two things:

We must shore up and organize into a group which preserves the teachings and the economy of God’s grace in union with the Church.

We must never honor anything falsely.  We must never ever treat something or someone pretending to be Catholic like part of the Church.  WE ARE NOT THAT.  THAT IS NOT US.

In doing so, we need to call for Francis to be removed or step down simply on the grounds that he is not a believer.  He’s not Catholic.  To do so would be the appropriate and measured amount of honor we should give him as Christians.  It’s impossible for the Church to be led by a Protestant, if he can even be called that, and it has dire need for a faithful leader today and always.  We must have no fear of being called schismatics and heretics by schismatics and heretics, no matter who they are.  Christ was calumniated the same way.

Catholics don’t worship popes.  They are led by popes to Christ.  Francis should be removed and replaced by a Catholic Pope.

In all things we need to draw the line. Build the wall.  Then we can attach the arches and spires.  The Church is a living thing.  It can always slowly rise up again through a crack in the bleak and crumbling sidewalk."

For more than 25 years now, I have been warning anyone who would listen about the counterfeit church being fashioned in the image and likeness of man and subject to doctrines of demons.  This church, the Mystical Body of Antichrist, has now become more open and therefore more visible under the pontificate of Francis.  This church, a work of the Devil within the True Church, is making itself known during this month's Synod.

Here is what Blessed Emmerich saw.

The Masonic plan to elect a false pope to deliver the Church up to sin explained here.

In the end, this Dark Church will fail. God has other plans.  But Jesus's promise that the Gates of Hell will not prevail against
His Church does not mean that the Adversary will not have much success in pulling a significant portion of the Church down with him.

Remain under the sure refuge which is the Immaculata.  The Turis Davidica will protect your faith.  Pray the Rosary daily.  Consecrate yourself and your loved ones to the Immaculate Heart of Mary.  Place yourself under Our Savior's Precious Blood.  Remain in the Sacraments.  Do Penance.

The Demon has launched his final campaign against Our Savior, His sinless Mother and her children.

The False Prophet, foretold by Archbishop Fulton John Sheen is here; a modern-day Judas who will lead others to worship the man-God* 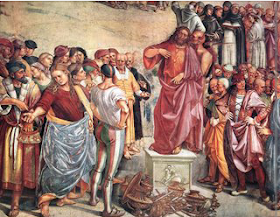