Bishop Mitchell Rozanski: Partisan politics over the demands of truth

Pope Benedict XVI has said that while, "everyone has the right to leave home to seek better conditions of life in another country...At the same time, states have the right to regulate migration flows and to defend their own frontiers, always guaranteeing the respect due to the dignity of each and every human person."

Pope Benedict XVI also said that immigrants have the duty to integrate into their host countries and respect their laws and national identities.

The challenge, as the Holy Father noted, is to "combine the welcome due to every human being, especially when in need, with a reckoning of what is necessary for both the local inhabitants and the new arrivals to live a dignified and peaceful life”.  See here.

As I said in a previous post, following the 1979 Iranian hostage crisis, during which the US embassy in Tehran was stormed and 52 Americans were held hostage for 444 days, President Jimmy Carter (a Democrat) severed diplomatic relations with and imposed sanctions on Iran. He also banned Iranians from entering the country.

Liberal hypocrites like Boston Mayor Marty Walsh conveniently ignore this fact as they attack Donald Trump for doing the same thing.  Such is partisan politics.

I left a few comments politely disagreeing with His Excellency which were promptly deleted.  This from the "welcoming" Bishop whose Secretary told me - last year - that if I didn't like certain comments from my parish priest I should look for another parish.  See here.

Bishop Rozanski obviously isn't interested in dialogue.  He's a partisan. He's not so much concerned with the demands of truth as he is with advancing an agenda. 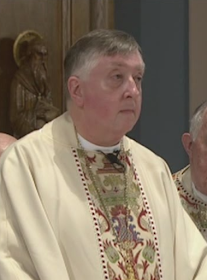