Father Michael Wood of the Springfield Diocese: If the laity have a problem with error or scandalalous behavior from a cleric: let them find another parish

“We invite you to criticize our institutions without reserve. One is not insulted by being informed of something amiss, but rather gets an opportunity for amendment, if the information is taken in good part, without resentment.” – Plato, Laws, Bk. 1, 635a


In his important work entitled The Devastated Vineyard, Dr. Dietrich von Hildebrand examines three false responses to the devastation within the Catholic Church while emphasizing that, "the most dangerous one would be to imagine that there is no devastation of the vineyard of the Lord" and that "our task as laymen is simply to adhere with complete loyalty to whatever our bishop says." Dr. von Hildebrand warns that, "the basis of this attitude is a false idea of loyalty to the hierarchy." (p. 246).


The Church's pastoral authority is not totalitarian. Her authority is subordinate to the theological virtues of faith and love, both of which redeem and perfect persons instead of merely subjecting them to a particular ideology. There are some who believe that the laity should never criticize a bishop because "it is impossible for a lay person to know all that goes into his decision-making process" and because "it just seems backwards to mistrust a man who authoritatively speaks in the name of Christ."

But a bishop only teaches authoritatively if he offers a teaching which conforms to that of the Church's Magisterium. And while the laity may not always be privy to all the factors that go into a bishop's decision-making process, they still are able to see the results of a particular decision and "have the right and even at times a duty to manifest to the sacred pastors their opinion on matters which pertain to the good of the Church." (Canon 212). Dr. Germain Grisez reminds us, "That the Church is a communion of faith and love does not mean popes and other bishops may ignore the conditions necessary for the just use of authority in any human community. Like any community's leaders, the Church's pastoral leaders can make wise decisions only if they deliberate well. The other members of the community should contribute to their deliberation by responsibly expressing their opinions on matters concerning the Church's good."
Pope John Paul II said that there is room in the Church for constructive criticism. Sometimes such criticism must be directed toward a bishop. Especially when he sets himself against the Church's teaching or fails to protect the faithful entrusted to his care.


Many today, including sadly many Catholics, equate criticism with condemnation or a lack of charity.  Dr. Montague Brown explains the difference between the two nicely: “Criticism is the honest appraisal of the value of ideas or actions…Pursued in the right spirit, it is a positive undertaking whose purpose is to gain an accurate understanding for the sake of growing in wisdom and virtue….Condemnation goes beyond evaluation of an idea or action to a declaration of the worthlessness of a human being. It is never fair and is a wholly negative judgment, referring only to weaknesses. Because condemnation is unreasonable, it serves no purpose in our quest for wisdom and virtue.” (The One-Minute Philosopher, pp. 28,29).

This past Sunday, I took exception to a Catholic priest, Father Peter Naranjo of Saint Mary's Church in Orange, Massachusetts, holding up Boston Red Sox celebrity David "Big Papi" Ortiz as a "good Catholic" and a "hero."  See here.  This post was forwarded by a reader of this Blog to Father Michael Wood of the Springfield, Massachusetts Diocese.  Besides serving as the secretary for the local Bishop, Mitchell T. Rozanski, Father Wood is on the diocesan "vocation team."  See here.

Father Wood responded to this reader by implying that I  should not be, "airing [my] frustrations in such a public and uncharitable way" and added: "Please see Matthew 18: 15-18.."  Then he suggested, in part, that I should "find a new place to go to Mass.."

"You are the one being uncharitable. And Father Naranjo's promotion of an individual who publically opposes Church teaching and routinely uses profanity is disgusting...Saint Thomas Aquinas, from his Summa (you might try reading it sometime):

I answer that, With regard to the public denunciation of sins it is necessary to make a distinction: because sins may be either public or secret. On the case of public sins, a remedy is required not only for the sinner, that he may become better, but also for others, who know of his sin, lest they be scandalized. Wherefore such like sins should be denounced in public, according to the saying of the Apostle (1 Timothy 5:20): "Them that sin reprove before all, that the rest also may have fear," which is to be understood as referring to public sins, as Augustine states (De Verb. Dom. xvi, 7).


True peace, not the asinine false irenicism promoted by poorly educated clerics such as Father Michael Wood, must be constructed day after day with compassion, solidarity, fraternity and collaboration on everyone's part.  And of course, it must be remembered that there is no authentic peace without prayer and a genuine love for truth.  In the words of Pope John XXIII:  "...as long as we are journeying in exile over this earth, our peace and happiness will be imperfect. For such peace is not completely untroubled and serene; it is active, not calm and motionless. In short, this is a peace that is ever at war. It wars with every sort of error, including that which falsely wears the face of truth; it struggles against the enticements of vice, against those enemies of the soul, of whatever description, who can weaken, blemish, or destroy our innocence or Catholic faith." (Ad Petri Cathedram No. 93).

Pope Paul VI, in his Apostolic Exhortation Recurrens Mensis October (The recurrence of the month of October), 1969, said that, "Undoubtedly, peace is the concern of men and a good common to all. As such, it must be the constant care of everyone...Despite much good will, there are many interests in opposition; much selfishness is shown; many antagonisms increase; many rivalries conflict with one another. Who does not see, then, the unflagging action demanded from each and all in order that love may triumph over discord and that peace may be restored to the city of men?"

There is no peace without God. And no peace without prayer. Which is why there is no peace among men. Most men do not pray - even many of those who give lip service to prayer. Pope Paul VI continues, "..peace is also the concern of God. He has placed in our hearts the ardent desire for peace. He urges us to work toward it, each doing his share, and for that purpose He sustains our feeble energies and our vacillating wills. He alone can give us a peaceful soul, and confirm in depth and solidity our efforts for peace. Prayer, by which we ask for the gift of peace, is therefore an irreplaceable contribution to the establishment of peace. It is through Christ, in whom all grace is given us, that we dispose ourselves to welcome the gift of peace. And in that undertaking, how can we do otherwise than to depend lovingly upon the incomparable intercession of Mary, His Mother, of whom the Gospel tells us that she 'found favor with God'?"

For Father Wood, clerics are above reproach and above criticism, no matter how fraternal such criticism is.  And the role of the laity is to shut up, pay their tithes and, if they're unhappy with error or scandalous behavior from a cleric, to find another parish.

Father Wood needs to spend more time prayerfully reading and meditating upon Christifideles Laici.  In the meantime, he has no business being on a vocation team.  One cannot give to others what one does not possess.  How can he provide a solid example of what a priest should be when he fails to live the life of an authentic shepherd? 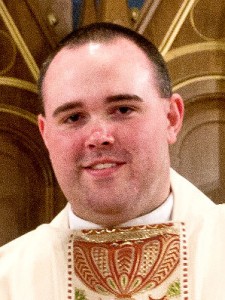