A couple of weeks ago I was criticized on Facebook by a Catholic housewife (Toni Vercillo) who is defending the heretic Father James Martin, S.J., who advances the LGBT agenda and asserts that homosexual acts are not sinful.  I called Martin a heretic and this housewife, who fancies herself a theologian without any formal training in theology, told me that, "Only the Church has the divine right to call someone a heretic."

What this unfortunate woman does not understand, and she is by no means alone in this regard, is that the Church does not have to formally charge someone with the crime of heresy for that person to be - in fact - a heretic.

The Catechism of the Catholic Church, which this unlearned woman is unfamiliar with:

"Heresy is the obstinate post-baptismal denial of some truth which must be believed with divine and catholic faith, or it is likewise an obstinate doubt concerning the same.." (2089).

Dr. Germain Grisez, one of the most respected moral theologians in the Catholic Church, explains that one can commit heresy in one's heart by a single choice.  He writes, "Canon Law limits heresy to the 'obstinate' denial or calling into question of a truth which is to be believed with divine and Catholic faith.  It might be supposed that 'obstinate' implies prolonged persistence in a heretical opinion despite an admonition to give it up. Like any other sin, however, heresy can be committed without any outward act to provoke a challenge and without obduracy, that is, persistence in sin over time.  Obstinate signifies that the sin of heresy is in purposely refusing to accept what one knows the Church holds to be divinely revealed."

How serious is heresy?  Again Dr. Grisez: "To see the seriousness of heresy, it is essential to remember that propositions of faith are not mere sets of words, but are truths which the words express and which bring one into touch with divine reality.  The heretic really rejects part of the reality which God wished to share with humankind in revealing Himself.  Moreover, that reality should be accepted inasmuch as God reveals it; thus, the heretic implicitly spurns God Himself."

A sign of this sin's gravity is that one who commits it is automatically excommunicated.  See c. 1364, 1 of the Code of Canon Law.

Got that Mrs. Vercillo?  Automatically excommunicated!

Now, as this article explains:

Fr. Martin asserts that chastity is not required of homosexuals

Fr. Martin publicly refers to the Holy Spirit as "She"

If you cannot admit to yourself that Father James Martin, S.J. is a heretic, you might think about extracting your cranium from your Gluteus maximus. 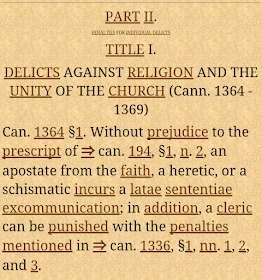 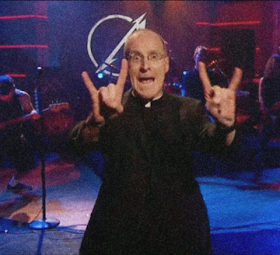