Saint Mary's Church in Orange, Massachusetts: Prayers for man accused of sexual assault, nothing for alleged victim, a minor


From The Greenfield Recorder:

"MANCHESTER, N.H. — Officials are investigating the death of an inmate from Orange, who was being held on multiple charges of sex crimes against a juvenile.
Keith Sullivan, 38, was pronounced dead at 4:21 p.m. Wednesday after he was transported from the Hillsborough County House of Corrections to Elliot Hospital in Manchester. He was unresponsive during the ambulance ride to the hospital, the Associated Press reported.
Sullivan had been arrested in Nashua, N.H., last month after a lengthy investigation by the Nashua Police Department into claims by a juvenile that Sullivan had molested him.
According to a statement by the Nashua Police Department, detectives received information in January that Sullivan had sexually assaulted the juvenile, who was known to Sullivan.."

The following is from Saint Mary's Parish in Orange, Massachusetts.  Several weeks ago, there was a call for prayer for Mr. Sullivan.  But no such prayer request for the alleged victim of Mr. Sullivan. 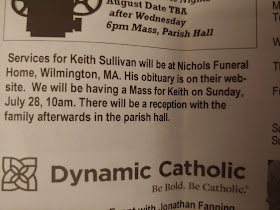