The Latin Mass must go, Antichrist is soon to reveal himself 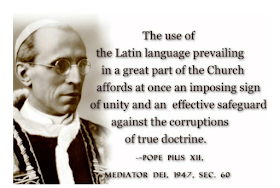 Mary Said: Our Son,The times have come which St. John had foretold - 'the time of times? The time has arrived to unveil the truth before the eyes of the christian faithful - the Truth which is the beginning of the great travails and tribulations, which inexorably seek to kill the soul of men. (Mt. 24,9: birth pangs; cf. Rev. 12.2)

The devil has seated himself on his throne, his altar. And he has now become the opponent of all good initiative. The antichrist has assumed total control over all human activity, possessing, as he does the might and power of his father, satan.

The evil spirits are leading the apostates into lawlessness and incredulity. The antichrist Is working actively through these evil spirits on the mind of man, conscious and subconscious. As a result man is led to commit yet greater crimes that distance him from Truth. The spirit of the antichrist has long since been operating through the mystery of lawlessness. He is becoming ever stronger in these hapless days.

The terrain is being prepared for the future 'benefactor' of mankind. Until now, the greatest obstacle in the final realization of the ideas of the antichrist is the Church of Christ, which alone is completely in unison with Divine revelation, and truly unveils the dark plans of satan.

In our times there are many dark forces and luciferian organizations that are working to undermine the Christian faith.

Christians must remember and know, that the choirs of the saints and martyrs of the Church are looking down upon you from the depths of history, questioning: why are you not defending your faith.

My children, as never before the servants of satan, the masons, are becoming active in their subversive efforts against the Church, the family and the nations of the world.

The father of the masons - the antichrist - stands over them. A liar and a thief from age to age. Having infiltrated the Church, the servants of the devil and the lawless one, have begun to eliminate actively from Christian prayers the invocations of the Archangel St. Michael, who is the patron of the Catholic Church.

His name is being removed from Masses and liturgical texts. Modern priests and bishops especially are destroying the statues of the Archangel, Saint Michael. They justify this as if this, take away from Christ, which is an outright lie.

Things are being done in the Church which are opposed to God: penitential practices are eliminated in Lent. Self-denial and penance are scoffed at. Instead, they preach the happy life and love of fame.

The Catholic masons are spreading the idea that Jesus Christ has already won heaven for us by His death on the cross, and that our human efforts are not required. They use modern priests to falsify the Holy Mass, so that nothing of holiness remain. The antichrist through these evil spirits is trying to raise doubts about the truth of the Eucharist. This is why the Pope blessed you to organize Eucharistic Congresses throughout the entire world. On September 17 this year you had the special grace with your wife to kneel before the Holy Father to receive his Papal blessing.

The enemies of the living God and of His Church are spreading the idea, that the blessed Eucharist is only, a symbol, and that Jesus is not present under the appearances of bread and wine during the Sacred Liturgy.

This is why they forbade the celebration of the Holy Mass In Latin*. The antichrist has ordered his evil spirits, the masons, to undermine the authority of priests, comparing them to ordinary people. Women in churches walk around everywhere with their heads uncovered.

Modern priests are clamoring to have women serve during Holy Mass on the grounds of the constitution about the equality of the sexes; and are even to be admitted to the priesthood, through which they offend my Son. They are demanding full freedom to act for women as ministerial priests.

The antichrist is clamoring to forbid kneeling during the reception of Holy Communion, as though the spirit of democracy required this.

They tell children that God loves them just as they are and this is why children have full freedom to do as they wish.

The apostate women religious teach the children not to fold their hands devoutly during prayer, for God loves them as they are.

Many churches forbid organ music, and they have substituted modern music for this. Modern priests are doing everything they can to destroy a personal relationship of Jesus with those praying.

At the same time the satanists in the world are rapidly trying to destroy the economy and business. These are the panic signs of the antichrist. He knows that he cannot prevail over the Church. And defeat is coming upon him as never before. Great changes will shortly take place in the East, both the Near East and the North East. Russia will reveal its true face. Remember that you cannot enter into the same river twice. If you want to know a man today, don't judge him by his past events and old deeds. Because man is what he is really and truly only what he is at the present moment of contact with him. He changes very quickly and this is why you must reacquaint yourself with any-one at the moment of your present encounter.

To win time, the antichrist is spreading half truths about his position, to induce people to think that not everything is lost. I have already told you that you must look at their deeds if you want to know the servants of the devil.

There are many church organizations under the control of satan and they are not, in fact, defending the Church. Groups of somnolent Catholics are seeking to paralyze the spreading of truth about the antichrist. This is why the masons will ignore and persecute those visionaries that denounce satan and the works of the devil. Those will become renowned who present primitive visionary accounts about the activity of the antichrist, and will nowhere speak of the threat to mankind because of the large number of degenerates, that are struggling to the top for power over people. This is why you will be the only ones to recognize the truth.

Peace and happiness be with you. Amen.

Just prior to the Reign of Antichrist, Venerable Bartholomew Holzhauser tells us that, "During this unhappy period there will be laxity in divine and human precepts. Discipline will suffer. The Holy Canons will be completely disregarded, and the clergy will not respect the law of the Church. Everyone will be carried away and led to believe and to do what he fancies, according to the manner of the flesh. They will ridicule Christian simplicity ; they will call it folly and nonsense, but they will have the highest regard for advanced knowledge...As a result no principle at all- however holy, authentic, ancient, and certain it may be, will remain free of censure, criticism, false interpretations, modifications, and delimitation by man.

These are evil times a century full of dangers and calamities. Heresy is everywhere, and the followers of heresy are in power, almost everywhere. Bishops, prelates, and priests say that they are doing their duty, that they are vigilant and that they live as befits their state of life. In like manner therefore they all seek excuses. But God will permit a great evil against His Church; Heretics and tyrants will come suddenly and unexpectedly; they will break into the Church while Bishops prelates and priests are asleep. They will enter Italy and lay Rome waste; they will burn down the churches and destroy everything."

The Reign of Antichrist will witness a celebration of sin and perversion the likes of which few can imagine. Pleasure is the new principle par excellence. If pleasure can justify homosexual behavior (and increasingly that is what our sin-sick society is saying), then other deviant forms of sexual activity which are viewed as pleasurable by some will also be logically justified. This will include pedophilia, pederasty, ephebophilia, gerontophilia, necrophilia, sadism, masochism and bestiality.

What will not be tolerated is the supernatural faith of Roman Catholicism and its universal language, Latin - so hated by he who will come in his own name (John 5:43), his entrance having been prepared by the False Prophet, an anti-Pope who serves him and his Masonic forces.