Mel Gibson on the Counterfeit Church led by anti-pope Francis

The Counterfeit Church, the Mystical Body of Antichrist,  has arrived.  For years I've been exposing this filthy whore.  See here.

Hear what Mel Gibson had to say recently.

Francis on making liturgy a battleground 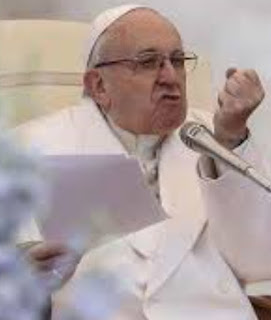 Francis has just said that it's impossible to worship God while making liturgy a battleground.   See here.

This is most ironic since it is Francis and his ilk who have created a battleground where there was stability and peace.  The arguments for the New Mass have been soundly refuted.

Francis' attitude betrays a hateful irreverence toward the Mass which made such great saints as Padre Pio and the holy Cure of Ars, Saint Jean Vianney.  In “Salt of the Earth,” then Cardinal Ratzinger and now Pope Benedict XVI declared that, “A community is calling its very being into question when it suddenly declares that what until now was its holiest and highest possession is strictly forbidden and when it makes the longing for it seem downright indecent.”

How much more so when that same liturgy is disparaged?

Where has this crusade against "rigidity" brought us?  Read Jones statistics here.

Clarence Thomas: We won't be bullied by anti-life activists 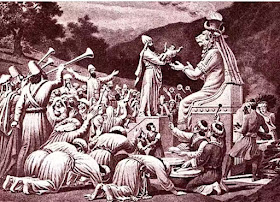 "Supreme Court Justice Clarence Thomas has a message for the radical abortion activists who think they can bully the Supreme Court into revising its draft opinion overturning Roe v. Wade: You can’t bully us.

Abortion activists plan to 'raise hell' at churches across the country on Mother’s Day with protests and, some fear, violence as outrage grows in response to a leaked draft opinion from the U.S. Supreme Court that overturns Roe v. Wade.

But Justice Thomas says those mislaid plans will not work in terms of bullying the high court to go back on its apparent decision."

The violence from anti-life activists has already begun.  See here and here for example.

In the same way that the Nazis waged a war against the Jewish People while denying the personhood of every Jewish person they sent to the gas chamber or placed before a firing squad, pro-death politicians in the Satanic Democratic Party attempt to justify the killing of innocent children in the womb by asserting that these victims of genocide cannot be considered human beings until they have reached "viability," which was defined by the United States Supreme Court as that stage of fetal development when the baby is "potentially able to live outside the mother's womb [that is, can survive], albeit with artificial help." (Roe vs. Wade, U.S. Supreme Court, 1973, p. 45).

"Some people try to justify abortion by claiming that the result of conception, at least up to a certain number of days, cannot yet be considered a personal human life. But in fact, 'from the time the ovum is fertilized, a life is begun which is neither that of the father nor the mother; it is rather the life of a new human being with his own growth. It would never be made human if it were not human already. This has always been clear, and...modern genetic science offers clear confirmation. It has demonstrated that from the first instant there is established the program of what this living being will be: a person, this individual person with his characteristic aspects already well determined. Right from fertilization the adventure of a human life begins, and each of its capabilities requires time - a rather lengthy time - to find its place and to be in a position to act." (EV, No. 60).

But the pro-death crowd, servants of the demon Moloch, are prepared to commit acts of violence to create an atmosphere of fear in a feeble attempt to force their demonic agenda on the rest of the populace.

Kyrie eleison. God, our Lord, King of ages, All-powerful and Almighty, You Who made everything and Who transforms everything simply by Your will. You Who in Babylon changed into dew the flames of the "seven-times hotter" furnace and protected and saved the three holy children. You are the doctor and the physician of our souls. You are the salvation of those who turn to You. We beseech You to make powerless, banish, and drive out every diabolic power, presence and machination; every evil influence, malefice, or evil eye and all evil actions aimed against your servant. . . Where there is envy and malice, give us an abundance of goodness, endurance, victory, and charity. O Lord, You who love man, we beg You to reach out Your powerful hands and Your most high and mighty arms and come to our aid. Help us, who are made in Your image, send the angel of peace over us, to protect us body and soul. May he keep at bay and vanquish every evil power, every poison or malice invoked against us by corrupt and envious people. Then, under the protection of Your authority may we sing, in gratitude, "The Lord is my salvation; whom should I fear?" I will not fear evil because You are with me, my God, my strength, my powerful Lord, Lord of peace, Father of all ages. Yes, Lord our God, be merciful to us, Your image, and save your servant . . . from every threat or harm from the evil one, and protect him by raising him above all evil. We ask you this through the intercession of our Most Blessed, Glorious Lady, Mary ever Virgin, Mother of God, of the most splendid archangels and all yours saints. Amen."

Make no mistake about it.  This is a spiritual war between the Children of Light and Satanic servants of Moloch who have found a home base in the Democratic Party.   See here.

The end of Roe v. Wade

“Roe was egregiously wrong from the start,” wrote Justice Samuel Alito in the draft which was circulated inside the court before someone leaked it to the news outlet. “We hold that Roe and Casey must be overruled.”

Lord God, I thank you today for the gift of my life,

And for the lives of all my brothers and sisters.

I know there is nothing that destroys more life than abortion,

Yet I rejoice that you have conquered death

by the Resurrection of Your Son.

I am ready to do my part in ending abortion.

Today I commit myself

Never to be silent,

Never to be passive,

Never to be forgetful of the unborn.

I commit myself to be active in the pro-life movement,

And never to stop defending life

Until all my brothers and sisters are protected,

And our nation once again becomes

A nation with liberty and justice

Not just for some, but for all,

Through Christ our Lord. Amen!