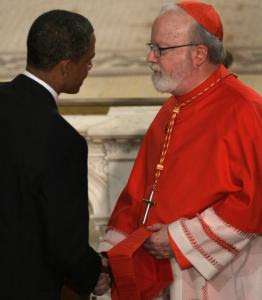 There can be little doubt that the Archdiocese of Boston has a cozy relationship with the Democratic Party. Many would argue that the relationship is too cozy. In an editorial for LifeSiteNews.com entitled "The Kennedy Funeral - A Golden Opportunity or Capitulation for the Catholic Church," John-Henry Westen wrote: "Saturday's grandiose Catholic funeral for Senator Ted Kennedy has the potential to be a scandal that will make Notre Dame's Obama Day a walk in the park. With all four living former Presidents in attendance and an address from President Barack Obama, the funeral is set to be a royal crowning, right inside a Catholic Church, of a man who betrayed the most fundamental moral teachings of the faith.

What example will this give to Catholics and the rest of the world looking in? It will surely belie the Catholic teachings on the sanctity of life and sexuality. 'Surely,' they will say, 'if one of the most vociferous proponents of abortion and homosexuality in politics is so feted in the Church, the Church cannot possibly regard abortion as murder.' Would anyone so honor one who so advocated what the church officially considers an 'unspeakable crime'?"
We all know what happened. Senator Kennedy was feted by archdiocesan officials as "our brother and friend." Responding to this horrendous scandal, I wrote that, "I have nothing but love and respect for His Eminence, but it would appear that he does not deplore error and falsehood as much as he deplores disunity." See here. And because he does not deplore error as he should, because he has not offered the strong leadership which the Catholic faithful deserve, many Catholics have never considered that there is an incompatibility between their political affiliation and their religious identity. As Dr. David Carlin has said, "..when clerical leadership is weak or foolish, we can't be surprised when the quality of lay Catholicism sinks." (Can a Catholic Be a Democrat? How the Party I Loved Became the Enemy of My Religion," p. 106).

Joe Sacerdo has reported on the close relationship which Fr. J. Bryan Hehir of the Boston Archdiocese has with the DNC. He writes, "Fr. Hehir's comment on a panel that he respects the Democratic National Committee (which vehemently opposes the Catholic Church on key issues like abortion and gay marriage) validates the questions about Fr. Hehir we have been raising for some time." (See here).

How does one reconcile one's Roman Catholic faith with membership in [or identification with] the Democratic Party? Again, Dr. Carlin explains, "Another method Catholics use to validate their membership in the Democratic Party, despite the party's anti-Christian moral agenda, goes like this: they concede that abortion, for example, is morally wrong and that it's tragically wrong for the Democratic Party to support it; but then they talk about the need for 'balance' and the importance of not taking a single-issue approach to politics. 'The Democrats,' they say, 'might be wrong on a few issues, such as abortion and same-sex marriage - but they're right about so many other important issues: race, poverty, peace, education, health care, the environment, and so on. In politics we have to weigh in the balance the evil and the good...This superficially persuasive line of reasoning could have been used to support the Nazis in the 1930s. A pro-Nazi Catholic could say, 'Oh yes, it's too bad - this policy of the Fuehrer toward the Jews. We deplore the firing of Jewish professors, we deplore the Nuremberg laws, we deplore Kristellnacht. But anti-Semitism, while a great evil, isn't the only evil. Far from it. We have to balance the evil done by the National Socialists against the good they've accomplished. Hitler has revived the economy, has restored law and order, has built autobahns and Volkswagens, has won the respect and salutary fear of the international community, has once again made it possible for Germans, who had been so humiliated for so long a time, to lift up their heads and be proud of their nation. Hitler isn't perfect - no politician ever will be. The question is, 'Are the Nazis on the whole producing more good than evil? Are they better than the available alternatives - namely, socialists and communists? The answer to this question is, without doubt, yes.'

Somebody might object that my analogy exaggerates the evil of abortion, which surely isn't comparable to anti-Semitism even in its pre-genocidal stage. Yes 'somebody' might say this, but Catholics who understand the moral teaching of their own religion can't very well say it. To them, the forty million and more abortion-homicides that have taken place in the United States since the 1973 Roe decision are clearly a greater moral evil than Hitler's pre-genocide anti-Semitism of the 1930s and even, it can be argued, no less evil than the six million homicides that made up the Holocaust. Some people will scoff at this comparison, but that's simply an indication that they reject the Catholic teaching that abortion is homicide.." (Can a Catholic Be a Democrat?, pp. 119, 123-124).
Pope Benedict XVI has spoken clearly enough. And he has condemned "gay marriage" and abortion as "among the most insidious and dangerous challenges" to society. The Democratic Party advances both. It's difficult then for any faithful Catholic to understand how one of Cardinal O'Malley's top aides can have "respect" for the Democratic National Committee.
Related reading here and here.
Paul Anthony Melanson at 6:11 AM
Share