Cardinal Timothy Dolan argues that he is not capitulating to an "aggressive 'Gay' agenda." Actually he is.

Writing for his column in New York Catholic, Cardinal Timothy Dolan complains that he is receiving much criticism for deciding to serve as Grand Marshall in next year's St. Patrick's Day parade which will feature homosexuals marching under their own banner.  The Cardinal writes, I haven’t been in this much hot water since I made the comment, right after I arrived as your archbishop five-and-a-half years ago, that Stan Musial—my boyhood hero of my hometown St. Louis Cardinals—was a much better ballplayer than Joe DiMaggio!

Now I’m getting as much fiery mail and public criticism over my decision to accept the honor of Grand Marshal of this year’s St. Patrick’s Day Parade. According to the critics, I should have refused, due to the Parade Committee’s decision to allow a group of self-identified Gays of Irish ancestry to march in the parade with their own banner.

As with Stan Musial, I’ll stand by my decision. However, enough of you have courteously expressed some confusion and dismay, that, as your pastor, I owe you an explanation. Let me try.
For one, the decision to change the parade protocol was not mine. The archbishops of New York have never been “in charge” of the parade. Although my predecessors and I have always enjoyed friendly cooperation with the Parade Committee—and still do—and deeply appreciate the identity of the Parade as a celebration purely of Irish heritage, intimately linked to the Catholic Faith, we’ve never had a say in Parade policy or the choice of the Grand Marshal. Nor did we expect or want one!

So, in the current 'brawl,' (they have been hardly rare in the Parade’s grand 253-year history!), I did not make the decision! You will recall that I in the past often expressed support for the former policy—that the only banners and identification to be carried was that the group was Irish—and that I found it logical and fair. To those who charged that the policy was “anti-Gay,” I often observed that no one person, Gay or not, was excluded from the parade. This was simply a reasonable policy about banners and public identification, not about the sexual inclinations of participants.

I did not oppose the former policy; nor did I push, condone, or oppose the new one. While the Parade committee was considerate in advising me of the change, they did not ask my approval, nor did they need to.

However, I admit that, for most folks, this is not the reason they are upset with me, and this brings us to point two. Many of you, while acknowledging that the decision to change policy was not mine, feel strongly that I should protest it, publicly condemn it, no longer support the Parade, and refuse the invitation to serve as Grand Marshal.

While a handful have been less than charitable in their reactions, I must admit that many of you have rather thoughtful reasons for criticizing the committee’s decision: you observe that the former policy was fair; you worry that this is but another example of a capitulation to an 'aggressive Gay agenda,' which still will not appease their demands; and you wonder if this could make people think the Church no longer has a clear teaching on the nature of human sexuality. Thank you for letting me know of such concerns. I share some of them.

However, the most important question I had to ask myself was this: does the new policy violate Catholic faith or morals? If it does, then the Committee has compromised the integrity of the Parade, and I must object and refuse to participate or support it. From my review, it does not. Catholic teaching is clear: “being Gay” is not a sin, nor contrary to God’s revealed morals. Homosexual actions are—as are any sexual relations outside of the lifelong, faithful, loving, lifegiving bond of a man and woman in marriage—a moral teaching grounded in the Bible, reflected in nature, and faithfully taught by the Church.So, while actions are immoral, identity is not! In fact, as the Catechism of the Catholic Church reminds us, people with same-sex attraction are God’s children, deserving dignity and respect, never to be treated with discrimination or injustice."

The Cardinal argues that he is not capitulating to an aggressive homosexual agenda.  But his use of the word "gay" betrays the very opposite.  The Roman Catholic apostolate Courage, which assists those with a homosexual inclination to live authentically Catholic lives, embracing chastity, explains why it will not use the terms "gay" and "lesbian":

Q. Why doesn’t Courage use the terms “gay” and “lesbian”?

A. Courage discourages persons with same-sex attractions from labeling themselves “gay” and “lesbian” for the following reasons:

1) The secular world usually uses those terms to refer to someone who is either actively homosexual or intends to be. When a person decides to “come out” and say “I am gay” or “I am lesbian”, the person usually means “this is who I am – I was born this way and I intend to live this way. I have a right to find a same-sex partner with whom to have a romantic sexual relationship.” To “come out” as being “gay” or “lesbian” doesn’t usually mean “I have homosexual attractions and I have a deep commitment to living a chaste life”.

The Cardinal hasn't thought out his policy has he?

2) By labeling someone [as the Cardinal does by referring to people with a homosexual inclination as "gay"], we discourage those who may wish to try and move beyond homosexual attractions. Some people, especially young people, are able to further their psychosexual development with spiritual and psychological aid. If we labeled them “gay” and “lesbian”, they might think there’s no possibility of moving beyond these attractions.

3) There is more to a person than one’s sexual attractions. Even if one experienced same-sex attractions for most of one’s life, he or she is first and foremost a child of God created in His image. To refer to that person as “gay” or “lesbian” is a reductionist way of speaking about someone. We are even trying now to avoid using the term homosexual as a noun, or as an adjective directly describing the person (i.e. homosexual person). Although it takes more words, we prefer to speak of “persons with same-sex attractions”. Fr. Harvey has said that, if he could, he would rename his first book “The Homosexual Person” to something else like “The Person With Homosexual Attractions”.

There are people within the Catholic Church who might argue that those who label themselves “gay” or “lesbian” aren’t necessarily living unchastely. That’s true, but the implications of the terms in today’s society don’t commonly connote chaste living. Furthermore, they are limiting their own possibilities of growth by such self-labeling, and reducing their whole identity by defining themselves according to their sexual attractions. At Courage, we choose not to label people according to an inclination which, although psychologically understandable, is still objectively disordered."

The Cardinal errs as well when he suggests that only homosexual acts are sinful.  In its document entitled Letter to the Bishops of the Catholic Church on the Pastoral Care of Homosexual Persons, which was published on October 1, 1986, the Sacred Congregation for the Doctrine of the Faith recalled the distinction between homosexual tendencies and homosexual practices: "Although the particular inclination of the homosexual person is not a sin, it is a more or less strong tendency ordered toward an intrinsic moral evil; and thus the inclination itself must be seen as an objective disorder."

Many interpret the Church's teaching as meaning that a homosexual person only sins if he or she actually engages in homosexual acts.  I have received comments at this Blog suggesting that only homosexual acts are sinful.  But this is not the Church's teaching.  Although the homosexual inclination itself is not a sin, still, the homosexual person sins if he or she makes a concession to this tendency in his or her mind.
It is Catholic doctrine that any disorderly tendency, and most especially toward a vice which is contrary to nature, cannot have a right to citizenship in a person's thoughts.  Recall the teaching of Our Lord Jesus in Matthew 5: 27, 28: "You have heard that it was said, 'You shall not commit adultery.'  But I say to you that every one who looks at a woman lustfully has already committed adultery with her in his heart."

This is why in the Confiteor [Latin: I confess], which is part of the Penitential Rite, one asks for forgiveness for thoughts, words and deeds.

We know as well that homosexual persons also sin when their external behavior expresses a homosexual tendency.  Which is why we read in Isaiah 3:9 that, "Their very look bears witness against them; their sin like Sodom they vaunt, They hide it not.  Woe to them!  they deal out evil to themselves."  And in Deuteronomy 22:5 we read, "A woman shall not wear an article proper to a man, nor shall a man put on a woman's dress; for anyone who does such things is an abomination to the Lord, your God."

While Cardinal Dolan tries to convince you that he is not capitulating to the Culture of Softness, examine the photo of the late (Great) John Cardinal O'Connor and ask yourself: Who is the real Shepherd of souls? 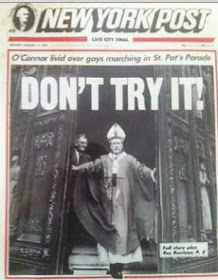 You know the answer....unless you too have succumbed to homosexual agitprop.  For more on the blind leading the blind, go here.