Rome is losing the faith


The Termite Nations have dispensed with God and His Commandments in their quest for unbridled hedonism. We are being prepared for the Reign of Antichrist. The Rev. P. Huchede, in his work entitled "History of Antichrist," explains the religious preparation, both intellectual and moral, for the Reign of Antichrist which will arrive after economic collapse: "But how shall he deprive the world of Christianity and have himself adored as God? Alas, it is only too true that the minds and hearts of men are admirably disposed for revolution and consequently ready to accept and bear the cruel yoke of such a tyrant. Revolution as the word itself implies means a subversion, but a subversion of all that is true, good, beautiful, and grand in the universe. It is the subversion of religion, representing its dogmas as myths and its moral teachings as tyranical. It is the subversion of authority. Licentiousness under the name of liberty becomes the order of the day; each one is invested with the right to govern himself. It is the subversion of reason: and do we not find leading minds in some of the most enlightened nations denying the principle of contradiction and maintaining the absolute identity of all beings? Revolution is therefore essentially destructive, and it becomes cosmopolitan by the action of secret societies scattered throughout the world. Is it not true to say that the 'mystery of iniquity' is prepared in secret revolutionary dens? But it does not suffice to destroy; it is absolutely necessary to build up again. The world cannot subsist long in a vacuum. It must have a religion; it must have a philosophy; it must have an authority. Revolution will furnish all these. Instead of the reasonable and supernatural religion of Jesus Christ, Revolution will preach Pantheism. The God-humanity will impart the theurgic spirit and thus lead men to adore the demon as the author of universal emancipation...What frightful immorality must follow in the train of this shameless prostitution of religion! Never has the threefold concupiscence made greater ravage among mankind. And this is the religion sought and hoped for as the cherished boon of the aspirations of our modern free thinkers. To our Christian philosophy, the honor of humanity's revolution will substitute a babel of extravagant and absurd ideas. Instead of a mild and efficient authority consecrated alike by Church and state, despotism and anarchy will rise up and contend for the shreds of religious liberty and human policy...if the state of perversion continue for a while longer, he [Antichrist] will find the world prepared to receive and serve him." (Rev. P. Huchede, History of Antichrist, pp. 13-14, Tan Books).

The preparation is intensifying.  Gloria TV explains that: "Kasper (Cardinal Walter Kasper, who has the Pope's ear) was the oldest cardinal eligible to vote in the Papal conclave of 2013.
Francis, on 17 March 2013, four days after his election as Pope, called Kasper "a clever theologian, a good theologian" in the course of a sermon in which he reported that Kasper's book on mercy "did me a lot of good".

The Theses of Professor Walter Kasper
Sept. 11, 2004
From the IK (Initiativ Kreis) News of 8-9/2003
"Faith does not mean a believing-to-be-true of wonderful facts and sets of beliefs that have authoritatively been put before us."
"Dogmas can certainly be one-sided, superficial, bossy, dumb, and rash."
Christ "presumably did not call himself either Messiah or Servant of God or Son of God and probably not Son of Man either."
The dogma that Jesus is "completely man and completely God" is able to be superseded.
Kasper writes "that we must call the many miracle stories in the Gospels legendary."
Even when [if] Kasper admits Jesus performed healings: "On the other hand, with some probability one need not consider [the] so-called miracles of nature as historical."
The Resurrection of Jesus is "no objectively and neutrally ascertainable historical fact."
Regarding the oldest account of the Easter event (Mk 16:1-8), Kasper comments "that here we are not talking about historical characteristics but [linguistic] means of style which are to get people's attention and create tension [suspense, excitement]." Other New Testament factual claims about the Easter and Ascension accounts, too, are mere "means of style" for Kasper.
Statements about the immanent Trinity or about the pre-existence of Christ are, according to Kasper, "not direct statements of faith but theological statements of reflection."
Kasper also speaks of the "Resurrection of each individual in [at] death." Hence "any talk of life after death is misleading." In addition, any talk of heaven, hell, and purgatory is "a very inappropriate, indeed misleading way of speaking."
By the "not very fortunate expression 'infallibility of the Church'" is meant "that the Church . . . cannot definitively fall back to the status of the Synagogue and cannot deny Christ definitively."
The dogma of the Church's universal mediatorship of salvation, clothed in the words "extra ecclesiam nulla salus" ["no salvation outside the Church"], which is most important for ecumenical dialogue, Kasper calls a "most misunderstandable phrase."
http://www.cardinalrating.com/cardinal_45__article_83.htm
.....

"For Walter Kasper, the miracles narrated in the Gospels are not historical facts related as eyewitness testimony by two Apostles, and as testimony heard by two of the Apostles' disciples, nor are they "segni certessimi” of Our Lord Jesus Christ's divinity as defined by Vatican I dogma. Rather, they are "instead, a problem which makes Jesus' activity strange, and difficult for modern man to understand."1,2 So, in homage to "modern man," or to be precise, to prideful man who believes only in himself, Walter Kasper deems himself authorized to put into perspective the "undeniable tradition which witnesses these miracles to us."3
For Kasper, what are Jesus' miracles?
"These non-historical stories," he writes, "are statements of belief in the salvific meaning of the person and message of Jesus."5 Briefly, for Walter Kasper, Jesus never raised either Jairus' daughter or the widow of Naim's son from the dead, nor did He even call Lazarus from his tomb. Neither did He ever calm tempests, nor multiply the loaves, nor walk on water, etc.
According to Kasper, the evangelists invented these "non-historical stories" the way that our grandmothers made up fables at the fireside when there was no television to corrupt children. And just as our grandmothers' fables only sought to inculcate a "morality," so too the Evangelists' "fables" about Jesus' miracles "did not intend to present Jesus as Lord over life and death."
In any case, for Walter Kasper, also as to his assumption that the miracles did occur-which, like all of the "new theologians" he firmly doubts-Jesus could not have performed miracles simply because he was not God. Jesus, he says, never advanced such "claims," and at Caesarea Philippi, Peter merely confessed, "You are the Messiah," and Jesus also proclaimed this before the Sanhedrin.7 But when the first Christian community confessed that Jesus is the Son of God, it did not in fact mean that Jesus really is the Son of God, but only wished "to express the idea that God manifests and communicates Himself in an absolute and definite way in the story of Jesus." End of story. In fact, the first Christian community did not intend "to acknowledge a dignity for him that would further his claims." Naturally, it was St. Paul's and St. John's habit to further Jesus' "claims."8
Walter Kasper negates the Resurrection. For him, "the empty tomb represents an ambiguous phenomenon, open to different possibilities of interpretation."10 And interpretations of the Resurrection are "beliefs and testimonies produced by people who believe," and who, via the "new theology's" strange logic, necessarily lie, and who also simply attest to whatever facts that they have been lead to believe.
he continues, a certain "grossly erroneous type of assertion that Jesus was touched by their hands and ate at the table with his disciples...runs the risk of justifying a too coarse Paschal faith."11W. Kasper, Gesù Cristo, Queriniana, 6th edition, p. 115. Translated by Suzanne Rini from the Italian edition

Rome is losing the faith.  The Man of Sin approaches.  Opposition to the Lord Jesus and His Commandments 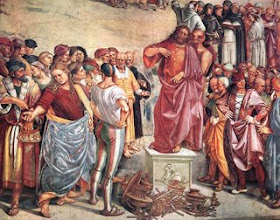 is the order of the day.
Paul Anthony Melanson at 4:20 AM
Share