The Boy Scouts will now expose their youth to homosexual predators

"A traditional values leader finds it ironic that the largest pro-LGBT lobbying group in the U.S. criticized Scott Walker for voicing support for a Boy Scouts policy the Wisconsin governor said protected children.

Last week the BSA voted to drop its longtime ban on openly homosexual leaders. Prior to that vote, Walker – an Eagle Scout and GOP presidential hopeful – was asked how he felt about the proposed policy change.

'I have had a lifelong commitment to the Scouts and support the previous membership policy because it protected children and advanced Scout values,' he told the Independent Journal Review.

In response, the Human Rights Campaign called for an apology from the governor. '[His] suggestion [that the Scouts' policy] somehow 'protects' children from gay adults is offensive, outrageous, and absolutely unacceptable,' HRC president Chad Griffin offered in a statement. 'His comments imply that we represent a threat to the safety and well-being of young people.'

Peter LaBarbera of Americans for Truth About Homosexuality takes issue with Griffin's reaction, reminding HRC of its own history – and particularly that of one of its major contributors and co-founders.

 'Terry Bean himself is being prosecuted for having homosexual sex with an underage boy – and now it's come out that he had sex with another underage boy,' LaBarbera explains. 'And so for the Human Rights Campaign to condemn Scott Walker for wanting to protect Boy Scouts from homosexual predators is just the height of irony.'"

Harry Hay, the founder of the Mattachine Society which, "proved to be the catalyst for the American gay rights movement." (Dudley Clendinen, "Harry Hay, Early Proponent of Gay Rights, Dies at 90," The New York Times, October 25, 2002), deserted the Catholic Church after having homosexual relations at the age of 14 (with a sailor ten years his senior), and was himself a proponent of man-boy sex, giving a speech at an October 7, 1984 conference of NAMBLA (North American Man/Boy Love Association) in San Francisco.

Harry Hay spoke frequently at NAMBLA events and periodically came to the defense of the organization.

So, one of the founders - some would say the founder - of the American "gay rights" movement, was a proponent of sexual relations between men and boys. Why doesn't this trouble those in the mainstream media?  Because the mainstream media has bought fully into the radical homosexual agenda and is incapable of any objectivity whatsoever with regard to the subject of homosexuality.
 
This point is illustrated most eloquently in Phil Valentine's book entitled "The Conservative's Handbook."  Mr. Valentine notes that, "On September 26, 1999, thirteen-year-old Jesse Dirkhising was lured to the apartment of two gay men where he was repeatedly raped and then strangled to death, some reports say with his own underwear. Where was the national outrage?  Here was a child  who was sodomized and murdered by two adult men and the mainstream media ignored it."

Mr. Valentine adds that the murder of Matthew Shepherd "sparked outrage across the country" because the mainstream media which virtually ignored the brutal rape and murder of little Jesse Dirkhising, "played up the crime and the subsequent call from the Left for federal hate-crime legislation to protect gays."

Then Mr. Valentine notes, "Unfortunately for little Jesse Dirkhising and his family, he doesn't fall into any protected group.  The crime against him wasn't based on race or religion or sexual orientation.  It was merely two deranged, perverted monsters who preyed upon an innocent little boy. Was he any less dead than Matthew Shepherd?  There's no question that his death was more tragic - a young boy, repeatedly raped then killed.  Why did the media ignore it?  Because it didn't fit their definition of a politically correct story." (The Conservative's Handbook, p. 98).

Sex between men and boys has long been a part of homosexual culture and history as documented by openly homosexual history professor William Armstrong Percy III in his book entitled "Pederasty and Pedagogy in Archaic Greece." See here.  Of course, propagandists for the Homosexual Hate Movement will never admit to this. 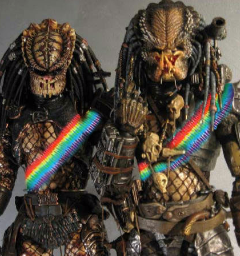