Francis, the Masonic infiltrator foretold by Nubius, is now openly calling for a Luciferic one-world order while advancing a false pacifist "Gospel" of peace.

Advancing a pacifist "gospel," the Masonic Destroyer asserted that, "There is no god of war."

"The Lord is a warrior, Lord is his name! Pharaoh’s chariots and army he hurled into the sea; the elite of his officers were drowned in the Red Sea. The flood waters covered them, they sank into the depths like a stone. Your right hand, O Lord, magnificent in power, your right hand, O Lord, shattered the enemy. In your great majesty you overthrew your adversaries; you loosed your wrath to consume them like stubble. At the blast of your nostrils the waters piled up, the flowing waters stood like a mound, the flood waters foamed in the midst of the sea."

The Lord goes forth like a warrior,
like a man of war he stirs up his fury;
He shouts out his battle cry,
against his enemies he shows his might."

The God of old is a refuge;
a support are the arms of the Everlasting. He drove the enemy out of your way and he said, “Destroy!”

In Matthew 10: 34-36, Jesus explains that He will be a cause of division, because not everyone is open to Him Who is Truth:

"And now you know what is restraining, that he may be revealed in his time. For the mystery of lawlessness is already at work. But the one who restrains is to do so only for the present, until he is removed from the scene. And then the lawless one will be revealed, whom the Lord (Jesus) will kill with the breath of his mouth and render powerless by the manifestation of his coming, the one whose coming springs from the power of Satan in every mighty deed and in signs and wonders that lie, and in every wicked deceit for those who are perishing because they have not accepted the love of truth so that they may be saved. Therefore, God is sending them a deceiving power so that they may believe the lie, that all who have not believed the truth but have approved wrongdoing may be condemned." (2 Thessalonians 2: 6-12).


This scriptural passage is most important. For here Paul emphasizes that the power of the Antichrist is one of seduction. Antichrist is a seducer who seeks to draw people away from the truth. He will work from within religion to seduce people to abandon traditional Christianity and to worship him. How effective will he be? Father Livio Fanzaga, commenting on The Antichrist by Vladimir Soloviev, writes, "So great is the Antichrist's power of seduction over believers - and they never realize it - that he will openly pose as the savior and restorer of religion and universal peace. He will deceive many."


But a tiny remnant will remain faithful. As Pope Paul VI said, "It is enough if only a tiny flock, no matter how small, survives." These words are sobering and should speak loudly to us. Father Fanzaga continues, "In Soloviev, the remnant is defined by recognition of Jesus Christ, 'Himself and all that comes from Him. This is their total horizon and the inexhaustible meaning of life. The tiny flock is not made up of the avant guard intelligentsia - the intellectuals and the theologians have joined the emperor. Neither are they defined in terms of a moral code. Rather they are those who refuse to serve two masters.' I tend to regard them as ordinary people, the humble and those who remain faithful." (The Wrath of God, p. 33).


Pope Benedict XVI, as Joseph Cardinal Ratzinger, in an essay entitled, "A Final Reflection: Soloviev's vision of eschatological unity," reminds us that: "..the Antichrist has his followers, and always even among those occupying the highest spiritual offices.....Therefore, we should already, and always, be motivated by concern lest, with big Christian words and wrapped in a cloak of Christianity, we become servants of the Antichrist, who wants to set up his kingdom in this world and to render the future kingdom of Christ redundant."

The Antichrist will tell us that Jesus has failed to put an end to violence but that he alone can promise "universal peace."

Inflated in their rebellion against the God-Man, the Sons of Satan, those committed toward the atheistic program of attacking the Church from without and undermining it from within in preparation for the Man-God, will continue to intensify their persecution of craftiness and subversion until it reaches its culmination in an explosion of hate-filled rage which will bear much blood and death.

Father Livio Fanzaga, writing about the Antichrist, says that, "Catholicism alone will resist him. How then do we destroy this superstition which alone obstructs the world's self-revelation? How do we destroy this superstition which divides mankind and which prevents man from being truly brotherly and free? The true Antichrist is revealed in the replies to these questions. Here is perceived his profound being as the man of iniquity. He will not tolerate the idea of men who adore any god other than himself. His intolerance obliges him to make an exception to his pacifism and his philosophy of non-violence. He is the greatest pacifist in the history of the human race, but because peace and justice really reign on earth he will make an exception to kill and destroy the great superstition of Catholicism, once and for all time..." (Wrath of God: The Days of the Antichrist, p. 124).

The hidden hand* of Luciferic ecclesiastical masonry has revealed itself. 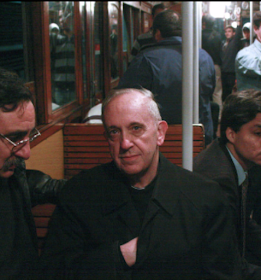