Facebook blocks me for 24 hours over their Covid Propaganda

For simply posting this article, Facebook has blocked me for 24 hours. Facebook, like Google, doesn't want people to know that the "vaccine" killed more people than Covid.

But the truth is getting out. And people are waking up. See here.

Americans are also waking up to the propaganda of the State-run media and its brainwashing. Not to mention its censorship. Total control of the means of communication is necessary for a dictatorship, or emerging dictatorship, so that through mass communication the individual may be propagandized and molded into conditioned responses.  It is necessary to destroy the individual's ability to figure things out for himself.  And as this ability atrophies, the individual is inundated with entertainments [think of Juvenal and his comment about bread and circuses] which prevent him from reflecting on the fact that his authorities are deceitful and manipulative. The dictatorship wants, the dictatorship needs, to reduce the individual to being an apathetic machine devoid of independent, critical thought.  The individual is subjected to a process of "massification" until he or she is completely dependent upon the State.  It was Hitler's boast that: "..sixty thousand men have outwardly become almost a unit, that actually these men are uniform not only in ideas, but that even the facial expression is almost the same.  Look at these laughing eyes, this fanatical enthusiasm, and you will discover how a hundred thousand men in a movement become a single type."

Look around you.  Listen.  And you will hear the conditioned responses of non-thinking automatons, brainwashed by the State-run media.  Such people use the same catch phrases  and merely regurgitate the same useless bile fed to them by the Moloch State. 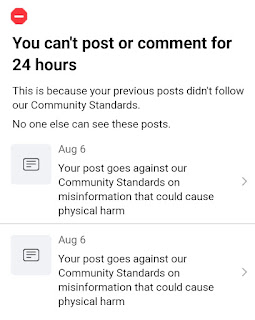 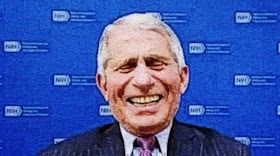 Join those of us who are saying "enough"!

And ask yourself, "If the government and big tech companies are telling the truth, why do they have to censor the citizenry?

Authentic science doesn't mind being challenged.   So why the fear of opposing thoughts?