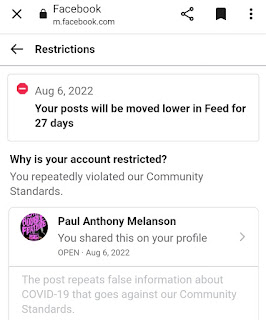 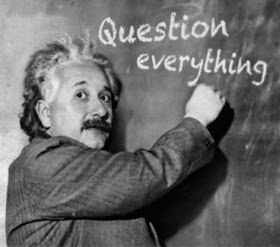 As noted in my last post, Facebook decided to block me for 24 hours for questioning its interpretation of the science on Covid. Now I'm told my posts will be lowered in its feed for 27 days because I had the sheer unmitigated gall to contradict the "experts" at Fascistbook.

Is Facebook being respectful of an authentic scientific method?  In a word, no.

Brian Keating explains, "I'm an astrophysicist at a major university. Science is my life. But when I hear somebody somberly intone, 'science says' or 'follow the science,' I get very nervous.

Science doesn't belong to any ideology. Science is the never-ending search for new knowledge.

That's what science means in Latin, by the way—knowledge. Not wisdom. Not morality. Not social policy. Knowledge. What we do with that knowledge is where wisdom, morality, and social policy enter the picture.

Knowledge, it turns out, isn't so easy to come by. And sometimes what we think we know for certain (the earth sure does look flat when we're standing on it) turns out not to be so certain.

Of course, I trust in basic scientific truths—those things for which there is overwhelming evidence like, say, gravity; even that humans play a role in the warming of the planet.

But scientists—even the best ones—can get things wrong..."

Fascistbook refuses to acknowledge this because it has chosen to push an ideology.  Because of this, it must attack anyone who dares to think for himself or herself.