"Pope Francis will meet with a gay rights activist in Paraguay in July, in what will be the first time the leader of the Catholic Church has publicly engaged with LGBT activists.

Recognizing the 'large impact of your organization on Paraguayan society,' Simón Cazal, executive director of SOMOSGAY, was invited to send a representative to meet with the pope at a group gathering on July 11, according to a letter obtained and posted by Buzzfeed.

SOMOSGAY lobbies for better protections and legal rights for those in the LGBT community in Paraguay — where there are no legal protections at all for gay people. Ahead of the pope’s expected visit and this invitation, SOMOSGAY launched a campaign pressing the Catholic Church to accept gay people.

'One can be lesbian, gay, bisexual or transgender AND a Catholic at the same time; there is no contradiction between being an LGBT person and being a religious person. Respect for personal beliefs is inherent in democracy,' Sergio López, a SOMOSGAY activist and Cazal’s husband, said in a press release.

The invitation is the latest effort by the pope to soften the church’s approach and reach out to communities normally shunned by the Catholic Church, like divorced Catholics and gay people.

Francis famously said 'who am I to judge?' about a celibate gay priest. Earlier this year, he lunched with gay and transgender inmates in a prison."

And now, back to reality.  The Church already accepts people with a homosexual inclination.  The Catechism of the Catholic Church:

"The number of men and women who have deep-seated homosexual tendencies is not negligible. This inclination, which is objectively disordered, constitutes for most of them a trial. They must be accepted with respect, compassion, and sensitivity. Every sign of unjust discrimination in their regard should be avoided. These persons are called to fulfill God's will in their lives and, if they are Christians, to unite to the sacrifice of the Lord's Cross the difficulties they may encounter from their condition." CCC, 2358.

But homosexual activists aren't content with this.  They want the Church to affirm them in their sin. This she cannot do.

Dr. Germain Grisez, one of the finest moral theologians of our time, explains that, "It might seem to follow that love must accept everyone, even enemies, just as they are, and to affirm them even in the error or sin which is present in them. But the law of love does not require indiscriminate affirmation of everything about other persons (see Saint Thomas Aquinas, S.t., 2-2, q.34, a.3). One's love must be like Jesus'. He loves sinners and brings them into communion with himself in order to overcome their error and sin. When the scribes and pharisees bring a woman caught in adultery to Jesus, he not only saves her from being stoned to death but warns her not to sin again (see John 8:3-11). In a true sense, Jesus is not judgmental, he sets aside the legalistic mentality, readily forgives sinners, does not condemn the world, and points out that those who refuse to acknowledge their sinfulness are self-condemned by the truth they violate (see John 3:16-21). But he realistically recognizes sinners as sinners and never accepts error as truth... Similarly, if Christians' love of neighbor is genuine, it not only permits but REQUIRES THEM both to 'hold fast to what is good' and to 'hate what is evil' (Romans 12:9)."

Let's hope Pope Francis can remember this as he dialogues with an individual committed toward living a sinful lifestyle while encouraging others to do the same.

Below are photos of Simon Cazal and the man he claims to be married to.

Will Pope Francis tell Simon to, "Go and sin no more" or will he say, "Who am I to judge?" 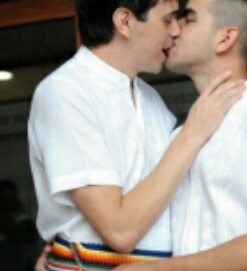 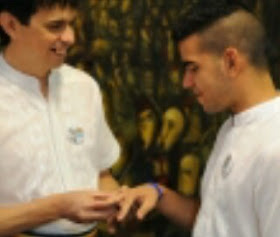